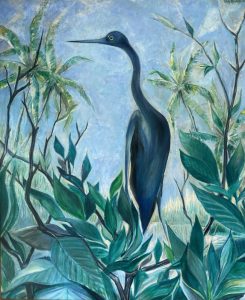 A nationally known cartoonist Wally Bishop was the creator of the long-running Muggs and Skeeter comic strip that, at its peak in popularity before World War II, appeared in 500 newspapers. The son of a newspaper reporter for the Bloomington Daily Pantagraph, Bishop said he was born in a newspaper. His first cartoons appeared in the Pantagraph. Bishop got a job as a sketch artist with the Chicago Tribune, and in 1923 the Hearst paper sent him to New York City, and King Features, where, at the age of nineteen, he was the youngest cartoonist. Muggs and Skeeter began syndication in 1927 and continued for the next forty-seven years. Bishop moved to St. Petersburg in 1928 for his health, purchasing developer Perry Snell’s home on Coffepot Bayou in 1929. St. Petersburg residents would occasionally find themselves appearing in the comic strip. Bishop was active in the St. Petersburg community and a founder and board member of the St. Petersburg Museum of Fine Arts. Born: Bloomington, Illinois, 1905. Died: January 15, 1982, St. Petersburg. Education: American Academy of Art, Chicago. Membership: National Cartoonists Society; Artists and Writers Club of New York City; Fellow, Royal Academy of Arts, London, England.