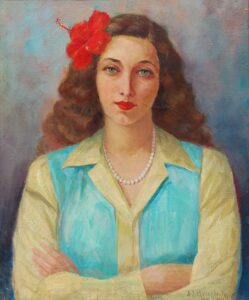 Joseph J. Hollenbeck was one of the first professional artists working in Palm Beach when he arrived there in 1910 from Jersey City, New Jersey. He shared a studio in a “crude wooden building” on County Road with noted photographer, Ernest W. Histed. Hollenbeck opened studios at the Royal Poinciana and Breakers Hotels, and later at Whitehall, Henry Flagler’s home, when it became a hotel. He said he had been painting in Palm Beach, “since South County Road was a cow path.” He and Histed shared commissions in painting and photographing some of Palm Beach’s first families, when many were beginning to make the resort their winter homes. Hollenbeck spent summer months at Southampton on Long Island, New York. At the opening of the Palm Beach Art Club exhibit in March 1924, the Palm Beach Post noted, “Many admiring comments were heard on the exhibits of Joseph J. Hollenbeck. Especially vivid was his jungle scene, typical of certain sections of Florida. The vivid coloring of tropical birds is delightful and exotic contrast to the dimness of the jungle in the light of a tropical moon, casting its beams down on the moss-bearded trees.” The Post noted Hollenbeck’s work in the Art League exhibit in April 1937, “Two of the finest canvases are those of J. J. Hollenbeck…Each shows the workmanship of a master…Detail work in both is splendid.” At the outset of World War 11, Hollenbeck began teaching art classes at the Norton Gallery in West Palm Beach. That year Hollenbeck, as part of a War Savings Bond drive sponsored by local civic organizations, donated a portrait by him, to the winner of a “Miss Freedom” contest. The contest raised over $500,000 with Thelma Jean Miller of Palm Beach High, the winner and named “Miss Democracy.” Hollenbeck continued in Palm Beach, teaching art on Fridays to children at the local children’s hospital. His last notice in the Post was November 30, 1968 that reads, “Mr. J. J. Hollenbeck, pioneer Palm Beach artist for the past 60 years, must dispose of his collection of fine paintings which include floral-landscapes, still life and religious. Exhibited at the Gallery, 301 Hibiscus Ave. Palm Beach.”

Hollenbeck, J. J. Palm Beach. Oil on board, 11 five ¾ by 15 ¾ inches. Signed on back, J.J. Hollenbeck, the board with Greenleaf and Crosby imprint.