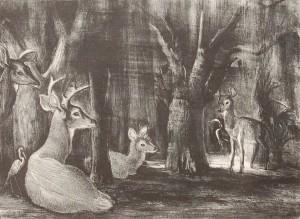 Victoria Hutson Huntley, born in New Jersey, grew up to become an artist renowned for her lithography. From the age of twelve through high school. she attended Saturday classes at the Art Students League in New York City, later becoming a full time student. While not satisfied with her study at the League, she appreciated Max Weber’s teaching, and George Luk’s advice that she had the potential to be a mural painter. Taking a position as Associate Professor of Fine Arts at the College of Industrial Arts in Denton, Texas from 1921 to 1923, she discovered that teaching was a rewarding experience and the beginning of her own education. In 1925 she married William K. Hutson. Her work took her to Texas, Connecticut, Florida, and Illinois. In 1930 she had her first one woman show of paintings and drawings at the Weyhe Gallery in New York City, where the gallery’s director, Carl Zigrosser, encouraged her to take up the medium of lithography.

Huntley studied with George Miller and soon was established as an award winning lithographer, depicting rural scenes, children ice skating, barns and houses, industrial and urban scenes, architectural studies, the human figure, and floral and bird studies. Her work described as having imagination, intensity, simplicity, technical skill, and beauty in composition. In 1934 Victoria married Ralph Huntley and assumed his name professionally. From 1934 to 1942 she taught painting and drawing at the Birch-Wathen School in New York City. As Victoria Hutson Huntley she became a member of the American Artists Group. The Group composed of thirty-eight leading American artists, and representative of different schools of art, included Doris Lee, Peggy Bacon, John Steuart Curry, Mable Wright, Wanda Gag, Rockwell Kent, Kenneth Hayes Miller, Jose Clemente Orozco and Diego Rivera. Wanting to represent the best in contemporary American art, the 1935 Handbook Number One, stated the Group’s purpose: “…to popularize American art by making it better known to the American public. One way, and a practical way, to accomplish this purpose, is, to distribute as widely as possible first class reproductions of worthy originals.”

Reproductions were available first as greeting cards, including Christmas cards. Huntley’s Christmas Night was one of these. Four more of her lithographs were represented in the American Artists Group, Winter Landscape, Skaters, Colonial Interior, and Lower New York. From 1939 to 1941 she was resident artist at the Redding Ridge (Connecticut) School and resident artist and teacher of art at the Pomfret School (Connecticut.) From 1946 to 1953 the Huntley’s resided in Fern Park, Florida while Victoria taught art at Rollins College as an Assistant Professor of Art. In 1947 she received a grant from the National Institute of Arts and Letters; using the stipend to finance a trip to study the Everglades. The following year she received a Guggenheim Fellowship for creative work in lithograph. In 1955 Huntley moved to Geneva, Illinois. According to Edward Spellman in a 1956 Chicago Daily Tribune article, Huntley produced ten lithographs a year, spending the rest of her time on portraits and landscapes. The Huntley’s moved from Geneva to Chatham, New Jersey in 1963.