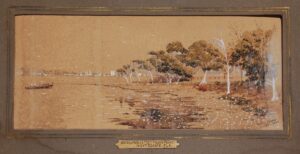 Artist, illustrator and writer S. Franklin Yeager said he had traveled twice around the world before settling in Florida in 1922. As a self-taught artist and writer, Yeager was working for a New York newspaper during the financial panics of the 1870’ and 1880’s. Self-taught, in 1875 Yeager began his career as a copyboy for the New York Daily Graphic, one of the first newspaper to use illustration. He later worked for Harper’s and Leslie’s magazines and the New York Herald. As a professional journalist Yeager covered the Boxer Rebellion in China in 1899, the Spanish American War and while working for the San Francisco Chronicle, covered the earthquake and fire of 1906. In 1922 Franklin Yeager working as a professional artist and writer in Ortega, near Jacksonville and had an office in Orlando on East Central Avenue. On August 31, 1922, Yeager presented a group of his watercolors at the Rosalind Club in Orlando. The Rosalind Club, founded in Orlando in 1894, is the oldest woman’s club in the city. He moved to St. Petersburg in 1924. The St. Petersburg Times, June 29, 1928, carried the following, “S. Franklin Yeager, an artist who a few years ago traveled in Europe and Africa illustrating and writing for some of the leading magazines of the country, arrived in St. Petersburg last week to locate permanently. Mr. Yeager’s early training was acquired in Philadelphia, and he has known intimately many members of the city’s famous art colony. His later work took him to practically every part of the globe. Since coming here he has painted and sketched some of the homes and business houses of the city. ‘You know, I’ve wanted to locate in this city for a long time,’ he told some old acquaintances Saturday. ‘It seems to be more of an art center than any other city in the state and I think that in its progress it is going to keep always in mind those things which, will stamp it as beauty-loving and cultured.” Membership: American Press Association. Died: April 13, 1927, Tampa. *Yeager’s business card has his name as “A. Franklin Yeager.” The Orlando Sun in 1922 has A. Franklin Yeager and shortly corrected his name to S. Franklin Yeager. His references in other Florida newspapers were always as S. Franklin Yeager.