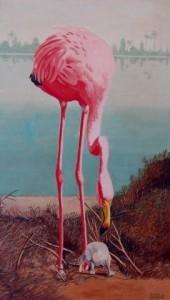 Alfred Bowman was an infant when, in 1893, his family immigrated to the United States from France. In 1925, after study and work in Philadelphia, New York, Chicago and San Francisco, Bowman moved to Tampa. In Tampa he opened a commercial art studio on Granada and worked there for the next thirty years. In 1950 Bowman moved his home to Lutz but continued his commercial art work in Tampa. He exhibited regularly with the Tampa Realistic Artists, and at the Florida State Fair, until, as he said, “It went abstract.”