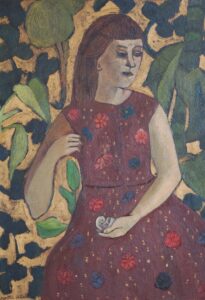 Martha Hartman is best known for her founding, in 1953, Sarasota’s famed Petticoat Painters, the oldest continuously exhibiting women’s art group in the United States. Born in Alabama, Hartman (nee Dye) was an infant when her family moved to Orlando in 1923. With an early love of art, Martha Dye, in the 9th grade at Cherokee Junior High, won first honors for her poster. At a May 1937 PTA banquet she was named, “Star Artist.” At Orlando High School, as a student in the Sketch Club, Dye won a prize for her work submitted at the annual Mid-Winter Festival. Dye worked for the Army Air Corp during World War II, saving her money to attend the Ringling School of Art. She moved to Bradenton in 1945 to study at the Ringling. Here Dye met her husband, William Hartman; they were married in Orlando in June 1946.  In 1949, when Hartman won her first, first place award, at a Sarasota Art Association exhibit, the male jurors decided to award her a certificate instead of a promised check. Needing to feed a growing family, Hartman was furious. Two years later, in 1951, she and her husband started the Hartman School of Art; one of their first exhibits featured only women artists. Martha Hartman’s remarkable career in art continued for the next fifty years: winning recognition and awards in Florida, holding one-man exhibits in Michigan, the Parthenon Art Gallery in Nashville, Tennessee and many exhibits as a couple with her husband. Her last exhibits in Sarasota garnered a series of awards at the Longboat Key Art Center. In November 1987, at an Art League of Manatee County exhibit, The Women’s Caucus for Art’s “Black and White,” she was still campaigning for women’s art with an award-winning acrylic collage titled Sing Not for Me, showing women’s heads in the foreground and a disturbing male face in the back.