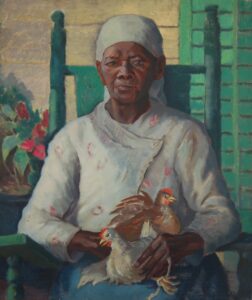 In 1922 Aunt Mandy Crosby was a black woman know to hundreds of Orlando citizens, likely for her famed fried chicken. An article in the Orlando Sentinel, March 1, 1922 describes her being swindled out of her life savings. Twenty-five years later the Orlando Evening Star, March 1, 1947, reminisced in, “How Time Flies” from our files 25 years ago, “Aunt Mandy” Crosby, respected Negro woman, was swindled out of her life’s savings $775, when a young Negro played a confidence game on her on Orange Ave.” Herring likely painted her portrait on his visit to Orlando in 1933.

Frank Stanley Herring was a Yankee. Born and raised in Pennsylvania and for many years an art instructor at the Grand Central School of Art in New York City. Herring worked as a commercial artist for New York’s Fleischmann Company and exhibited at New York’s Montross Gallery. What was it that made this quintessential Yankee into a celebrated artist, nationally known for his sensitive portraits of black lives in the South? The answer: At Grand Central, in New York City, he fell in love with one of his art students, Frances Hall, a southern belle from Milledgeville, Georgia. It was his early life experience in the North, and visits to his wife’s home in Milledgeville, painting what he saw, portraits of black lives, that would define his career.

The couple spent part of the winter of 1923 as guests at the Belleview Biltmore Hotel in Clearwater, Florida and likely traveled down to Miami. The Miami Daily News, September 27, 1925 noted, “Mr. and Mrs. Frank Herring of New York City are visiting…Mr. Herring is a commercial artist and will be connected with the firm of Filer & Cleveland. The Herrings plan to Make Miami their home.” And in November 1925 the Miami Herald announced, “Artist Locates Here. Frank S. Herring Accepts Position with Advertising Agency…Herring, former artist with the Fleischmann Company of New York City, has joined the staff of the Southeastern Advertising Agency, according to an announcement made at the office of the firm in the Halcyon Hotel. Mr. Herring is a commercial artist of note in his home city, and came to Miami to accept the position tendered him recently.” At this time Miami and most of Florida was in a real-estate boom. Real estate developers needed to advertise and newspapers and magazines and direct advertising on billboards was the only way. The Southeastern Art Agency needed, “Expert copy writers, idea men, layout men and artists…” Frank Herring was one of those artists. A few of his renderings of Miami developments appeared in the Miami Herald, November 1925 and January 1926, all signed in a stylized “F Herring, SAA.” The Herrings moved into their new apartment at the El Clifton in May 1926. The real estate boom continued until the “Great Miami Hurricane” hit in September 1926 and by 1929, with the stock market crash, the Herrings were back in New York City.

The Atlanta Constitution, from Milledgeville, Georgia, July 3, 1929, “Frank Herring, nationally known artist of New York City, is exhibiting his watercolor sketches and oil portraits here this week at the home of his wife’s father, Dr. T. M. Hall. Mr. Herring does commercial designing for many leading publications. He has commissions to do a number of portraits of prominent Georgia people and will spend the summer in Georgia working on these paintings and making sketches of the historic spots in Georgia and the old antebellum negro characters around Milledgeville.” Herring gave exhibits of his work by request in a number of Georgia cities. He was beginning to develop a national reputation but just beginning the portraits for which he would be remembered. He returned for the summer of 1930, the Atlanta Constitution noting, “Frank Herring of New York City, nationally known commercial and portrait artist, is spending the summer painting many old scenes of the south, and antebellum negroes of Georgia…He painted a big picture of Frank Clark, a colorful old before-the-war negro. He later used this picture in miniature on Christmas cards sent out by the Herrings.” The South was still Jim Crow and the KKK active, but Herring’s sensitive portraits were defined by his northern upbringing and his personal artistic esthetic.

In the Summer of 1932, the Herrings made the first of many visits to Little Switzerland, North Carolina. Little Switzerland, high in the mountains of western North Carolina, was considered to have some of the most magnificent views… when clouds filled the valleys below. The Herrings had friends in Orlando and in September 1932, purchased property there. In the Spring 1933 they toured Florida by motor car from Orlando to Tampa to Naples and Miami before returning up the east coast to New York.

The Herrings returned to Orlando just after Thanksgiving 1933 and were guests at the 23rd annual opening of the Orlando Country Club. The Orlando Sentinel, January 4, 1934, commented on his work, “Herring has the ability to quickly catch the personality of his subject to a striking degree. The artist is completing a collection of watercolors of the antebellum negro.” Sunday January 8, 1934 the faculty and students of Rollins College honored Herring with a reception and a week-long exhibit of his work. The exhibit included scenes of the everyday lives of black people in Georgia. More than two hundred guests attended the reception, “one of the outstanding social events of the Winter season,” the reception line included a Who’s Who of early central Florida artists: Professor Jean Jacques Pfister, head of the art department at Rollins, George E. Ganiere, Florida sculptor at Rollins, Virginia Robie art instructor at Rollins, Edith Tadd Little who pioneered art in St. Petersburg, Lois Bartlett Tracy from Sarasota, Sam Stoltz later famed for his central Florida nature paintings, and Hugh McKean founder, with his wife, Jeanette Genius, of Winter Park’s Hosmer Morse Museum. After Rollins, Herring left for an exhibit of his work in Palm Beach and then onto Miami.

While still living in New York, Herring began spending his summers in Little Switzerland. He had his first major exhibit in Atlanta in November 1935 with 33 watercolor portraits and in January 1938, his first one-man exhibit opened at the Montross Gallery on Fifth Avenue in New York City. In September he exhibited at the Mint Museum in Charlotte, N.C.

With the end of World War II, in the summer of 1945, the Herrings in partnership with artist Edward Shorter, purchased a summer camp property, just north of Little Switzerland, in Burnsville, N.C. called Seecelo. Seecelo was a 52-acre tract of land, at an altitude of 3,000 feet, in the heart of the Blue Ridge Mountains with a large studio, 10 cottages, two lodges, a dining room, a lake and a swimming pool.

In 1947 Herring gave up his position at Grand Central and spent the next three years teaching landscape, figure and portrait at the Ringling School of Art in Sarasota. The Herrings made many friends in Florida. Those relationships continued with annual winter visits to Florida and summer trips to Burnsville. Herring was a member of the jury, along with Ralph McKelvey, for the February 1948 Sarasota Art Association members juried exhibit. In August of 1953, at the 6th Annual Burnsville Summer Art Exhibit, Florida was represented with three members of the Art Club of St. Petersburg, May Clinedinst, Paula Gaffney and George Bartlett, as well as other friends and artists, Francois Calvet from Orlando; Laura Lock from Sarasota and Gladys Randolph of Miami. Herring was back in Orlando in March 1955 for a reception and tea by the Orlando Art Association.

Herring finally retired to Milledgeville, Georgia in 1956. He and his wife Frances would teach summer Burnside Art Classes at Seecelo for twenty years, only stopping in 1965 for health reasons. Herring died at Burnside in June of 1966. A memorial exhibit of his watercolors was held there in August. Today his work rests in major museums in the United States including the Smithsonian and the Metropolitan Museum in New York City.