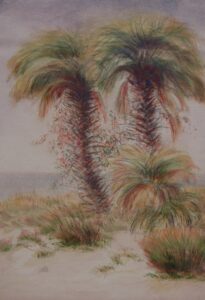 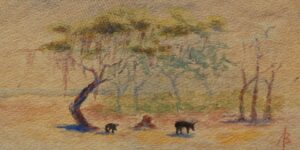 Ada Augusta Brewster, St. Petersburg. Watercolor mounted on cardboard, 3 7/8 by 7 3/8 inches. Monogram, AB lower right. Inscribed on back $1.25. The last of the Razorbacks-Said to be brot in by Ponce de Leon.

For a woman born in 1842 Ada Augusta Brewster lived an adventurous life working as an artist in California, Nevada, Nantucket Island, Cape Cod, and Georgia. In 1892 Brewster moved to New York City as curator of the city’s Ladies Art Association and opened a studio at 204 West 100th Street. On December 24, 1902 Brewster placed an advertisement in the New York Tribune offering for sale at her studio 23 at 247 West 125th St, “a rare chance to purchase her fine paintings.” On December 4, 1904 the New York Times noted an exhibit, “by students and professionals in painting and drawing, held at the Clausen Galleries, 342 Fifth Avenue, by the L. N. Shields Art Club, which has studios on Madison Avenue. There are 150 exhibits, including works by Walter Satterlee, William M. Chase…Ada A. Brewster…” Brewster first visited Florida in 1886 and in December of 1909 was writing to a friend and member of Tampa’s Students’ Art Club who exhibited one of her watercolors at the Club’s meeting that month. By 1916 she was living in St. Petersburg with a studio at 3rd Street North and a member of the local American Red Cross. The August 14, 1917 Tampa Daily Times published her letter noting Clara Barton’s Red Cross in Tampa during the Spanish American War, and her shipment of goods bound for Cuba, that were left on Egmont Key. When the giant shell mounds at St. Petersburg’s Jungle area were cleared for development, she wrote the St. Petersburg Times, April 20, 1918, “Oh! People, save what remains, you are piercing the heart of your city…Where is your wisdom?” During the winter season of 1917-1918 Brewster placed daily advertisements in the Times for her, “School of Art. Drawing, painting, music taught at the Art Studio of Ada A. Brewster, at Ninth and Tangerine Avenue, Sunnyside Station, Take the T car. Prices reasonable.” She left St. Petersburg in 1921 for her home Woodside, in Kingston, Massachusetts. The Boston Globe, February 19, 1929, noted her passing. “Miss Brewster was believed to be the last of the Civil War nurses in New England. She was the daughter of Elisha and Elizabeth Bates Brewster, one of nine children, and a direct descendant in the sixth generation of Elder William Brewster of Pilgrim fame. She was born and died on the land given to the Brewsters by William Bradford. As a young girl, Miss Brewster was well-known as a crayon artist and studied with Samuel Rouse of Boston, receiving several medals for her work. When the Civil War broke out…Miss Brewster and two of her sisters enlisted. She was stationed at Portsmouth Grove Hospital in Rhode Island, where she worked during the war. When the war ended, she resumed her work as an artist. Later she traveled around the country and was well known as an author, historian, and magazine writer. She lived for a time at St. Petersburg, Fla. after which she came home to Woodside to live with her sister in the old Brewster Mansion, which is filled with curious works of art.” Born: 1842, Kingston, Massachusetts. Died: February 19, 1929, Kingston, Massachusetts. Education: with Samuel Rouse at Lowell Institute in Boston; with Virgil Williams and Raymond Yelland at the School of Design. Exhibits: Pinellas County Fair at Largo, January 1918, first prizes: oil landscape, watercolor landscape, pastel landscape and heads; Largo City Hall, January 1918 with Gladys Le Baron. Directory: Listed in the St. Petersburg City Directory, 1916, as an artist with a studio at 603 3rd North. 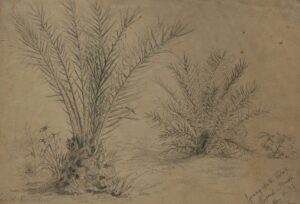