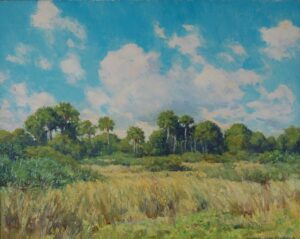 Anton Otto Fischer, famed for his illustrations in the Saturday Evening Post, Harpers and Cosmopolitan, was a Floridian. For years before his sudden death in Woodstock, New York, Fischer listed Key West and Shandakin, New York (near Woodstock, some fifty miles north of New York City), as his home. Born in Munich, Germany, orphaned at the age of five, and raised in a monastery, at the age of sixteen he ran away to sea. After years as a merchant seaman Fischer got off a ship in New York City and stayed. He became a naturalized citizen in 1917. Fischer’s Florida connection likely begins with his marriage to artist and illustrator Mary Ellen Sigsbee in 1912. Mary Ellen Sigsbee Fischer was the daughter of Admiral Charles D. Sigsbee, the captain of the USS Maine during the Spanish-American War. Navy veterans will remember Sigsbee Park, now the Key West Naval Air Station, named in his honor in the 1940’s. Admiral Sigsbee was well known in Key West and Mary Ellen Fischer likely developed a love for the Keys as a Navy dependent here. After marriage, the Fischers first lived in Kingston, New York on the Hudson River.

One of their first trips to Florida was to Coconut Grove, a suburb of Miami, for the winter season of 1926-27. At the first exhibit of the Florida Society of Arts and Sciences, founded by Howard Hilder and honorary president of the Society, Mrs. Augusta St. Gaudens, the Miami Herald (February 25, 1926) gushed, “Anton Otto Fisher, marine artist, gives a treat with a blue-gold sea picture drooping to a view of white sails. He has two other marines with the sea a darker, an indigo rather than a sapphire blue…one is so lovely that it answers for a sight of the real sea.” He completed a number of paintings, portraits and marine views before returning to New York in April.

Fischer continued to winter in Florida, returning to Coconut Grove in November 1935 to open a small working studio on Poinciana Avenue. The Miami Herald (December 1, 1935) noted, “At some time in the future he would like to build a home here with a real studio, because the Fischer’s like Miami without qualifications. They are enthusiastic about the climate, find a quality in the air that is ‘Caressing’ (Mrs. Fischer’s word) and a wealth of paintable material in the landscape. Mr. Fischer’s chief interest…has always been in marine studies, but this year he plans a great deal of landscape painting, particularly in the Everglades. It is his feeling that ‘Florida has never been properly painted.’”

In 1937 Fischer bought property in Key West and spent the winter season of 1937-38 at a leased home on United Street. The Key West Citizen (January 20, 1938) “The well-known oil painting showing a dismasted helpless schooner signaling to a fishing smack, on which are a group of colored fishermen and on whose stern is painted, ‘Flying Fish, Key West,’ and published in the ‘Saturday Evening Post’, by Anton Otto Fischer, famous illustrator, was painted high and dry in the Catskill mountains, entirely from memory and without the aid of pictures or other such help. Mr. Fischer disclosed this in an interview with The Citizen at his residence, 1401 United Street, where he and Mrs. Fischer are spending their first winter in Key West…Mrs. Fischer was Miss Sigsbee before marriage, daughter of the late Admiral Charles Dwight Sigsbee, well-known here, who captained the ill-fated ‘Maine’ which was blown up in Havana Harbor. The ‘Maine’ was stationed here for three weeks and Mrs. Fischer visited Key West for the first time then. Mr. and Mrs. Fischer have only the fondest things to say about the Island City. There is no place we would rather live in than Key West. It is like living aboard an ocean linger, with the most beautiful water on all sides…Next year the Fischers will again return and it is quite probable that they will establish a permanent winter residence here, they say. The Fischers returned to the United Street address for the 1938-39 season, pending construction of their home overlooking Garrison Bight and Bayview Park. The Miami New (December 20, 1938), “Last winter Fischer achieved some of his finest works in depicting marine life in the Gulf Stream off Key West. While this season he plans a number of fishing excursions, he indicated to friends he would spend some of his working hours catching the changing colors of the waters surrounding Florida Keys as viewed from Overseas Highway.”

Fischer seems to have had a friendship with editors of the Tampa Tribune. From 1928 to 1943, the Tribune, (May 6,1938) in a column called The Gulf Gleam, mentions Fischer as, “the only magazine illustrator who can draw ships correctly,” or “our favorite artist,” or on visiting with Fischer in the Spring of 1938, “In a little house in a pleasant portion of Key West, among the coco palms and other tropical trees, not far from the green and blue sea, on the southern side of the isle, we luckily found him at home…Fischer, we have always considered the only artist in the world who can paint pictures of sailing vessels and steamers both artistically and correctly. His illustrations are works of art.” The Gleam, also notes Fischer’s close friendship with Tampa artist Asa Cassidy.

During World War II, Fischer was commissioned a lieutenant commander in the Coast Guard on active duty on board the Coast Guard Cutter Campbell, to make a pictorial record of North Atlantic convoy duty. Fischer was on the bridge of the Campbell, making hasty sketches, when the destroyer closed with a German U-boat, rammed and sank the sub. Fischer’s paintings of the encounter appeared in Life Magazine and after the War, now retired a full Commander, his work was on exhibit at the United States Coast Guard Academy.

Fischer was one of a group of illustrator artists, including J. C. Leyendecker, N.C. Wyeth and Norman Rockwell, that defined the “Golden Age of American illustration.” He spent much of his mature life moving between his home in the Catskill Mountains and Key West. He loved cigars, gardening, playing the piano and the New York Yankees. Fischer died in Woodstock, New York far from the sea, March 26, 1962.