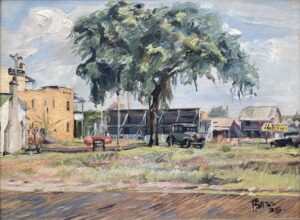 Fred Sass was either very talented and very smart, born with a silver spoon in his mouth, or one of Florida’s first pioneering-artist-entrepreneurs. Likely all are true. In 1888 Sass and his brother George were students at an art school in St. Louis, Missouri and later, while living in the Latin Quarter of Paris, they attended the Academie Julian studying art with Benjamin Constant and Jean Paul Laurens. George made art his profession and taught art in Kansas City, Missouri schools for years. Fred chose a different route to success, opening the Sass, Pay-As-You-Enter Restaurant, on Main Street in Kansas City in 1908.

Sass’s first commercial art, appeared in the Kansas City Times, August 14, 1908 when the paper published his cartoon of workmen entering, “Pay-As-You-Enter, Big Meal, now 10 Cents.” By 1911 he was serving 1200 to 1500 meals a day. Sass sold the restaurant and he and his wife Ollie, went on vacation.

Fred and Ollie Sass first came to Tampa Bay from Kansas City in January 1912 as tourists. That year they purchased land on the south side of Orange Lake in Port Richey along with the new hotel being built there by the Port Richey Company. Sass was a founding member of Port Richey’s Settler’s Club in 1914. By 1918 the Sass Hotel, had electricity, running water and Ollie Sass’s now famous home cooking. In 1919 Sass was honored by The Art Club of St. Petersburg, with a one-man exhibition of his paintings at the Florida Winter Art School on Beach Drive.

A few years later in 1923, Sass was a founding officer, vice-president and director of the First State Bank of New Port Richey. The Tampa Tribune, February 2, 1928, noted, “Fred Sass, who operates a hotel just to be sociable is more than a hotel man. He is an artist having studied in France and lived in the Latin Quarter. Here he learned more than pigments and the way to spread colors on canvas. He learned about French cooking and salads and mixtures of liquids…the cheering kind.”

In 1933 Sass bought a hotel in St. Petersburg at 1099 First Avenue North renaming it the Sass Hotel. He spent hours at his easel but during the winter season, with the heavy influx of tourists he reluctantly put aside the brushes and only painted when a guest or friend asked for a portrait in oil. His paintings could always be seen on the walls of the lobby, dining and other rooms of his hotel. The Tampa Tribune, November 26, 1935 described Fred Sass’s painting at the Florida State Fair, “Personality is illustrated in Fred Sass’s Artist Painter adjudged the best professional portrait and a favorite with the general public as well as to artist visitors.”