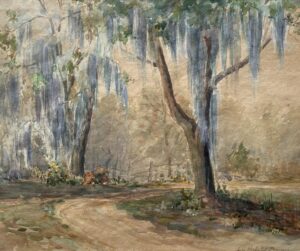 Lou Halstead Jerome was an important early leader of the art community in Orlando. The Orlando Sentinel (October 19, 1930) said she was, “one of the foremost instigators of art development in Florida and particularly ‘The City Beautiful.’” Born in Brooklyn, New York, and educated at the Art Students’ League, she moved to Orlando in 1910, and, at the age of twenty, joined the Orlando Old Maids Club! Halstead opened the Concord Art Shop, a small art gallery and tea-room on the corner of Magnolia and Concord in Orlando, and began teaching art at Rollins College and Orlando’s Cathedral School for Girls. She was superintendent of the Art Department of the Central Florida, Sub-Tropical Mid-Winter Fair from 1919 to 1929. Jerome spent summers with her family in the Berkshire Mountains of Western Massachusetts and was married there, in August 1921, to Henry C. Jerome, of Tulsa, Oklahoma. H. C. Jerome was a successful realtor in Orlando. In 1924 Lou Jerome worked with Ruby Warren Newby, then an instructor in art at Rollins College and later chairman of the Rollins art department, to organize the Orlando Art Association, with Jerome elected the first president. The Orlando Star carried the following comments by Jerome from her annual report, “If anyone had told me a year ago that at this time there would appear an editorial in one of our daily papers telling of plans of erecting a municipal building …with art room included, I don’t know what I would have said…It is the things we expect that we get.”

On April 27, 1927, Orlando and Gainesville women met at Lou Jerome’s home in Merritt Park, a suburb of Orlando, to found the Florida Federation of Art. Jerome recorded her sentiments in the minutes of the first meeting: “It is with a feeling of awe and trepidation that I report the meetings of The Florida Federation of Art; awe, because I feel so small a thing to put into words the beginnings of such a large and inspiring undertaking; and trepidation that I will be unable to carry over to you and to future members the atmosphere of inspiration and thrill of working out together, dreams and ideals for the State’s betterment in art education.” 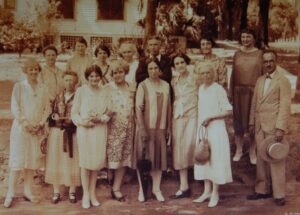 Jerome and Mrs. C.C. Collier opened the Studio Art Shop in the Washington Street arcade in 1933, “to get together the work of local artists and further the sale of their work.”

When Jerome exhibited with the Gainesville Association of Fine Arts in 1934 the Gainesville Sun said, “Miss Jerome’s paintings are the kind that one can live with and are in almost every state in the Union. She recently sold one of her works to State Senator Hodges of Tallahassee. ‘Old Fashioned Window,’ which will be on exhibition, won the prize given by the Tampa Garden Club for the best flower garden subject at the Tampa show.”

Sometime in the early 1950’s Lu Jerome married Charles W. Tieman and began exhibiting as Lu Tieman. She maintained a studio in the downtown Arcade fronting Orange Avenue for over twenty years. Years later the Orlando Sentinel (January 12, 1969) in an article celebrating the 45th anniversary of the founding of the Orlando Art Association, quoted Mrs. Tieman, “These were exciting days. At first, we had exhibits in the basement of the new library, later moving to the chamber of commerce when the library needed our space.” For her there was never enough exhibition space, but in 1960 the Orlando Art Association and the City of Orlando found city-owned property between Lakes Estelle and Formosa for a new art center. The Art Association changed its name to the Lock Haven Art Center and later to the Orlando Museum of Art.

Lu Halstead Tieman lived to see art transformed in Orlando, from a small tea-room art gallery on Magnolia in downtown Orlando, to making history at the Albertson Library with the founding of the Orlando Art Association and the Florida Federation of Art, to the construction of what now is the Orlando Museum of Art in Lock Haven Park. She died in Orlando, age 91, January 28, 1982. 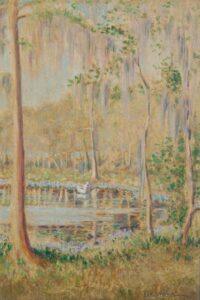