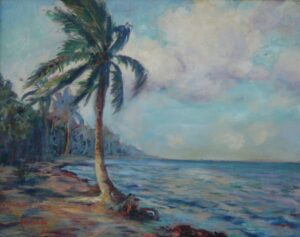 Ruby Warren Newby was a leader in the development of art in Florida, instrumental in the founding of the Florida Federation of Art and the Orlando Museum of Art. Ruby Warren grew up in Kansas City, Missouri, where her father, Wilbur Warren, made his fortune in grain, cattle and prospecting for gold in Arizona. Ruby, while roaming the hills and canyons of the West, developed a love of nature and art. Her father moved to Orlando in 1913, serving as a director of the Orange County Loan Association and Commissioner of Orange County Parks. At his death Wilbur Warren bequeathed a large tract of land to Orange County, today known as Warren Park.

In Kansas City Ruby spent three years working as an assistant in the art studio of Mrs. George Smith. During the summer of 1910, Warren toured Europe and the following year married Jonathan Newby. In 1917 Ruby Warren Newby was in St. Louis studying art with Kathryn Cherry and commercial art and watercolor with Ruby Short McKim.

In 1920 she and her husband moved to Kissimmee, Florida. While operating a hotel in Kissimmee, Newby organized a sketch club for painting trips on the north shores of Lake Tohopekaliga. She moved to Orlando in 1923 and began teaching an art class at the Cathedral School for Girls. In 1924 Newby was the only instructor in art at Rollins College, in Winter Park. That year she and Lou Halstead Jerome helped organize the Orlando Art Association.

Newby spent the summer of 1925 in the Berkshire Mountains of western Massachusetts studying art with Raymond P. Ensign, dean of the Art Institute of Chicago. While there, Newby was invited to the home of George Inness, Jr. at Cragsmoor, New York. Inness’ friendship and interest were an inspiration to her artistic career.

Newby was instrumental in developing the art department at Rollins College, increasing enrollment from twenty-three in 1925, to eighty in 1927, when two more teachers were added to the art faculty, and to 102 in 1928-1929. In 1927 she was one of the founding members of the Florida Federation of Art, and in March 1928 was a delegate to the 1st Annual Convention and Exhibition held in Gainesville.

Newby’s position at Rollins grew from instructor in art, to assistant professor and then full professor and chairman of the department in 1931. Florida sculptor George Ganiere and Hugh McKean (later President of Rollins) were both working with her as assistants. In March 1933 at the Florida Education Association annual convention in Tampa, Newby lead a discussion on “Why Art in School?” In the summer of 1933, she was teaching at the Ringling School of Art in Sarasota.

The Rollins newsletter, The Crescent, December 1940, carried a story on Newby that reads in part, “Her ability to infect her students with her own love of art and her sympathetic attitude toward their endeavors, made her an outstanding success as a teacher, and her habit of loading her jalopy with students and taking them to her camp on Lake Conway for coffee and wienies and high conversation, made her excel as a pal. In fact, her mop of curly grey hair was the only feature which distinguished her from the coeds.” Newby had a liberal attitude toward art teaching which she expressed in an article, Art for Human Needs, published in the magazine Education, in November 1940. Ruby Warren Newby died in February 1952. Her obituary appeared in the Orlando Morning Sentinel, February 25, 1952, “Mrs. Ruby Warren Newby, Tucson, Arizona, well known in art circles here for many years, died Friday in Tucson from injuries suffered in an automobile accident last fall. Mrs. Newby, who came to Florida about 1920 from Kansas City, Mo., started the Orlando Art Association in 1924, and was one of the active, enthusiastic and creative contributors to its early growth. She also was instrumental in the founding of the Florida Federation of Art in 1927, while she was president of the local organization. Later, she held other executive offices in both groups. Mrs. Newby’s father, Wilbur Warren, gave Orange County a large tract of land, known as Warren Park.”