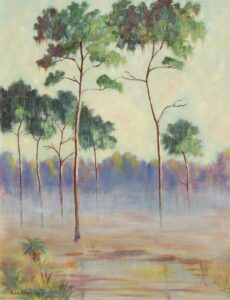 Alan W. Shaw came to Florida in 1925, working in Miami as a clerk, before moving to St. Petersburg in 1930. A self-trained artist who had worked as an assistant to Gutzon Borglum in the sculptor’s Connecticut studio, Shaw had an eclectic background; he served with the 27th Infantry Division in World War I, had some experience in the motion picture industry in Hollywood, and even worked in the oil fields of Texas. He is listed as an artist working for the government in the Report of the Assistant Secretary of the Treasury to Federal Emergency Relied Administration, December 8, 1933-June 30, 1934.

Shaw was active in the Art Club of St. Petersburg. When the Art Club held their 7th annual Beaux Arts Ball at the Jungle Hotel (now the Admiral Farragut Academy) in March 1934, the theme was a 13th century oriental pageant. Mr. and Mr. Alan W. Shaw were the prize-winning couple, “Mrs. Shaw a slave girl, her costume of rose silk and beaded sash while her husband had thrown over his shoulder a deep purple robe trimmed in gold braid. A green sash and headdress of red added an exotic tough to his costume.” (St. Petersburg Times, March 5, 1934) In December 1934, the Art Club sponsored a one-man exhibit of thirty-six Alan Shaw paintings at the club’s gallery on Beach Drive. The St. Petersburg Times (December 23, 1934), “Shaw Exhibit Will Attract Art Lovers. There are seven paintings in the exhibition in which the student of art will be particularly interested. The painting, ‘Three Oaks’, one of the larger works in the gallery, has a solidity which will bring pleasure to many of the art reviewers in Florida. There is reason for the statement. Florida artists have all too often forgotten the richness of Florida’s crimson sunset on the wet sands and the titanic flood of the seas on her shores. Alan Shaw in his ‘Three Oaks’ has given a deep heart to his landscape and on the forest in the foreground a delightful play of sun and shadows. None need object to the brilliancy of color in the yellow, purple and gold–Florida has the colors if you wish to go out to Alan Shaw’s woods and wait for them.”

In 1935 Shaw became director of the Federal Art Galleries in St. Petersburg, working as part of the WPA and the Florida Art Project. He ran the Art Center for the next six years.

Shaw’s one-man exhibit at the Art Club of St. Petersburg was reviewed in the St. Petersburg Times, February 9, 1936, “The Alan Shaw exhibition of oils and pastels which opened to the public Friday afternoon at 201 Beach Drive North, is proving a pleasing surprise to art lovers and visitors who appreciate canvases cleverly drawn and harmonious in color effects. This showing is probably Mr. Shaw’s best as he has worked intensively to bring real art before his critics, this being his second exhibition in St. Petersburg…Of the twenty-two oils and fifteen pastels; many are local landscapes typical of Florida and the sunshine.” Shaw was a director of the Florida Federation of Art, and in 1937, state chairman for Florida’s National Art Week.

In 1940 the Florida Art Project opened an exhibit of Shaw’s work in Pensacola. Adam Empie, director of the WPA Pensacola Art Center, in the Pensacola Journal, April 21, 1940, reviewed the exhibit, “To be honored in one’s own country is praise indeed for any artist. The history of art is filled with the neglect of men who were unappreciated in their own land but gained recognition elsewhere…So it is a pleasure to have in the Pensacola Art center, WPA, the work of a native painter who has been accepted not only in other states, but in Florida as well. Alan Shaw, of St. Petersburg…has not only exhibited in New York, Chicago and elsewhere, but has held one-man shows in St. Petersburg, where he received an honorable award one year and his picture was judged the best landscape in the Art Club exhibition, the next. Mr. Shaw’s success is all the more unusual in that he has been self-taught in painting. He worked in the studio of Gutzon Borglum for a while, where he studied sculpture. Later experiences in the moving picture field may have turned his interest from plastics to painting. The moderns have appealed especially to him, and he has tried his hand at some abstract designs. This is shown in this painting ‘Metropolis’, which is an early work. Shaw’s later canvases are more conservative and display his fondness for frank color and his eye for design. ‘Posies in a Window’ is a decorative piece, in which the fresh color is very striking. ‘Eastbound Freight’ will perhaps be considered his most interesting painting by those who see it. This was exhibited in the Virginia Museum of Fine Arts in Richmond. One of the latest works is entitled ‘Chicken Coop.’ This deals with a subject that might be equally familiar to truck farmers in many states and portrays Shaw’s sympathetic understanding of the humble scene.”

Shaw resigned as director of the Art Center in 1941 and returned to Miami. Over the following years Shaw exhibited at the Richmond Museum of Art, the New York World’s Fair and the Contemporary Arts Group shows in New York City. In December 1952, now remarried and living in Hialeah, he had a one-man exhibit of landscapes, figures and abstractions at the Miami Beach Art Center. In 1953 Shaw exhibited at the Lowe Gallery at the University of Miami and at the Contemporary Arts Gallery in Pinellas Park in August 1954, 50 oil paintings, “both imaginative and realistic landscapes of the South and Europe. The St. Petersburg Times noted in Names in The News, “Alan Shaw, director of the Art Center here from 1935 to 41, and wife, Jean, city visitors for the weekend…they now reside in Miami…Shaw is retired….” After that history is silent, Shaw’s life and death forgotten, except for the brief record of his art.