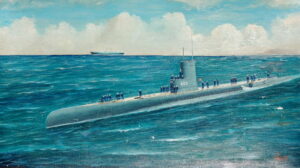 I first met Joe Selby one evening back in 1991. I had settled down late one quiet night, after a busy day in the ER, with a small glass of Old Grand Dad, to read the Maine Antique Digest. If you love antiques you have to read MAD. Browsing through pages on antiques shows, coming sales, and always searching for anything on Florida art, I was surprised, no amazed, to find an article on an unknown Florida artist, Joe Selby, by the well-known nautical art historian, Anthony Peluso, Jr.  I have kept the article all these years and not being able to tell the story better, have excerpted the following from Peluso’s article in MAD’s April 1991 issue.

The story begins on the docks of downtown Miami. If you were rich enough to sail your yacht into Miami’s city pier back in 1920 you might have been surprised to find a tall black man approaching on crutches. He had but one leg. He’d say, “Would you like me to paint your boat? “My boat doesn’t need painting.” “No, I want to paint a picture of your boat.” “When?” “Right now!” 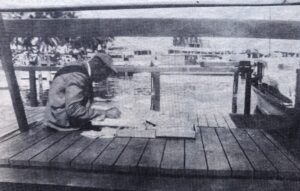 Joe Selby at work on the docks of Miami.

A price would have been agreed on (twenty-five dollars in the early years and seventy-five later) and he would have gone aboard to take measurements and make color notes. Joe Selby’s “studio” was the Miami city pier. He would have returned to the dock, sat under a shade tree near the old fire station, and with his paint box open at the ready, one of his subjects in the distance, painted the ship’s portrait.

Satisfaction guaranteed. One yachtsman recalled that Selby painted his yacht at rest and told him he would have preferred a view at sea. Selby took the finished portrait and said he would do it over. The captain volunteered to take the yacht and Selby into the Atlantic, but Selby demurred. He merely added the foam and the spray of a windswept sea. 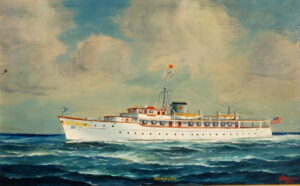 If you wished, you could have watched as the portrait appeared from the blank canvas, background first. You could have wondered how Selby would deal with the cigarette ashes that fell onto the wet paint from the ever-burning butt in his mouth. The ashes would simply disappear in the strokes of his brush. It could take a morning or an afternoon, but within hours after the deal had been struck, he presented his painting with confident self-satisfaction and collected his modest commission. Selby had no gallery or agent.

Joe (not Joseph) Selby was born in Mobile, Alabama, on January 7, 1893, at a time and a place most inopportune. That year’s financial panic would treat most men unkindly. A pamphlet Red Record, by the American minister to the Haitian Republic, Frederick Douglass, contained a detailed record of lynching in the years 1892-94. But at the same time, John Hope, a professor at the Atlanta Baptist College, would exhort his brothers to “be as restless as the tempestuous billows on the boundless sea.”

Tempestuous indeed since it was as a deck hand that Selby’s leg was mangled in a breaking tow line. His left leg was amputated in 1905. A child of twelve! 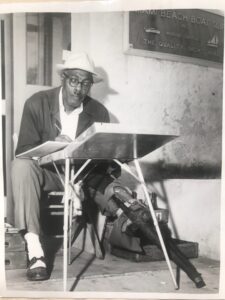 Selby had been to sea, visiting Jamaica and the Cayman Islands, and would chat about his visits there. He told of having crewed aboard the Tarpon, a Mobile, Alabama steamer that was lost in a hurricane in 1937.

The Museum of the History of Mobile has a photo of Selby’s Tarpon sketch. Mildred Cram in Old Seaport Towns of the South (1917) recalls passing through Mobile Bay and seeing a beautiful procession of large schooners from the Gulf of Mexico and the Caribbean, their spars and masts magnificent in the crisp winter sunlight, four and five-masted merchantman that carried lumber and coal to ports in the South. Selby crewed on such a ship. 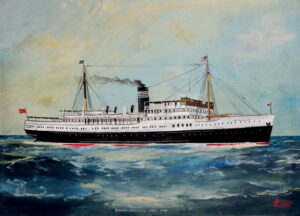 We don’t know if Selby had any education, or if he had any art training, or what winds brought him to Miami, but by 1919 he was working there as a marine artist.

Selby worked continuously, with a possible gap during World War II, until 1959. Over the span of these years Selby’s style was unchanged, a style that evokes old Yachting and Rudder magazine illustrations, a quality displayed in his first work and his last.

He lived most of his mature life in public housing on NW 66th Street in Miami’s Overtown. A measure of prosperity allowed him to build a modest house at 22nd Court, the home in which he spent his last years. He apparently never married and had no children or family, although he gave regularly to an orphanage. Each of those who remember him invariably describe him as a gentleman, intelligent and well-spoken.

Selby died in Miami at Jackson Memorial Hospital on September 1, 1960. The Miami Herald noted: ‘Old Joe,’ Nautical Artist, Dead at 69. Though ‘Old Joe” sat on Miami’s docks and did paintings for some of the country’s most famous millionaires, he died practically penniless. He had been a Miami resident for more than fifty years following a sea-going accident which cost him a leg. He was a familiar figure to dock workers and boat owners.” The Miami Times, a newspaper with a black readership noted he was, “buried in Lincoln and survived by a dear friend, Miss Eddie Mae Range.”

Should you buy a Selby? They’re hard to find and not important yet. (That was in 1991! Things are changing.) They turn up in Florida and Georgia flea markets, through Brimfield, and all over America, Canada and the Caribbean. They went with the yacht.

Images of the pleasure yachts of the 20’s and 30’s are rarely seen except in photographs, and even if we know the photographer, his or her life story couldn’t be as unique and interesting as Joe Selby’s. Besides, his paintings are from quite good to excellent. Don’t be surprised to one day see them exhibited alongside, Bards, Antonio Jacobsons or James Butterworths.

Over the years Joe Selby painted himself into art history as Florida’s only nautical artist. His relationship with a yacht-owning clientele seems a 20th century throwback to earlier days when wealthy patrons dealt directly with artists. Selby painted pictures for General Motors magnates Alfred P. Sloan and Charles “Boss” Kettering, for the Morgans and Rockefellers. What other American artist could have boasted a better clientele?  With permission Maine Antique Digest, April 1991.

*The USS Atule (SS-403) was commissioned at the Portsmouth Naval Shipyard, Kittery, Maine, June 21, 1943. After 2 weeks at the Fleet Sonar School in Key West the Atule transited the Panama Canal to Pearl Harbor. Her crew of 6 officers and 60 men spent the remainder of the World War II as part of a wolf pack in the Pacific. The boat endured depth charges and bombing to sink Japanese shipping, a destroyer and a light cruiser. USS Atule earned four battle stars for her service in World War II.