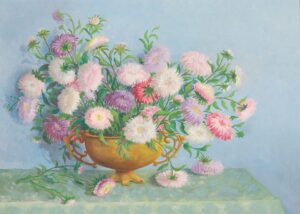 A native of Henderson, Kentucky, Ethel Schlamp was an instructor in art at Evansville College in Evansville, Indiana, before she and her husband, artist Philip Schlamp, moved to Miami in 1925.

A flower and still life painter who worked in watercolor and tempera, in 1929 Schlamp was chairman of the art committee of the Miami Woman’s Club, directing the Woman’s Club annual Artists’ and Writers’ Salon. The following year, 1930, she founded the Miami Art League with thirteen members. Schlamp described the league as “a baker’s dozen who banded together to share model expenses.”

When the league incorporated in 1944, with 60 members who, “put heart and soul into the project” hoping to “get an art gallery sooner or later,” they “pledged to establish and maintain an art society and an institution of learning for the mutual help and inspiration of member artists and those visiting in the Miami area.”

In 1948 Schlamp was president of the Florida Federation of Art and the Miami Women’s Club, awarded her the Myrtle Taylor Bradford Gold Medal, presented annually by the Club, to an artist or writer judged to have done outstanding work in his field for the community. Other women recipients were Dewing Woodward and Vivian Yeiser Larrimore.

Schlamp was nine times president of the Miami Art League, her work eventually brought the membership up to over 300. She managed twenty-two major art exhibits in the Miami area, including Miami Boat Shows, Poinciana Festival exhibits, Miami Women’s Club shows and the Coconut Grove Festival of Art.

The Daily Oklahoman (June 15, 1952) in reviewing Schlamp’s one-man exhibit in Oklahoma City said, “She paints flowers in a big, bold manner using her medium freely and very wet. She paints ‘Flower Portraits’ as she finds them growing, only much larger in size…her work big, lush, decorative…a delight to decorators who need a large splash of color….”

In failing health, Schlamp moved to Monticello, Florida in 1962 to be with family. Monticello was a suburb of Tallahassee. It was here that the Miami Herald (September 28, 1963) noted her efforts to see that the State of Florida accept the Ringling Museum of Art as a state museum. She died in Monticello, September 27, 1963.