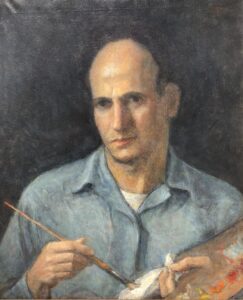 Paul Laessle, Miami. Self Portrait, oil on canvas, 20 by 24 inches, with handwritten label on rear stretcher, self-portrait Paul Laessle, not for sale.

Paul Laessle was the son of professional artists, his mother, Mary Middleton Laessle, a professional sculptor and portrait painter, his father, Albert Laessle, internationally known as a sculptor and a member of the National Academy of Design. After graduation from the Pennsylvania Academy of Art in 1935, Paul Laessle began his art career with the Pennsylvania WPA art project. He spent the first three years of the war as a mechanic and the last as a staff artist for the U. W. Maritime Service at Sheepshead Bay, New York, before moving to Miami in 1945.

Janet Reno, art columnist of the Miami Herald, noted Paul Laessle in her April 3, 1949, column, “A folding easel, an Austin and the open road. This is a combination that partially explains the quantities of little ‘First Prize’ slogans that have appeared in the last couple of years on the contributions of a Miami painter to group exhibitions. The rest of the equation is the determination of Paul Laessle to devote his whole time and energy to painting, whether it pays off financially or not. So far it hasn’t, he reports-but you can drive an Austin a long way on a little bit of gas, and paint isn’t too expensive, and the roadside sandwiches you get on overnight trips don’t cost much. Since he came to Miami four years ago, Mr. Laessle and his ‘painting wagon’ have hit a lot of Florida high spots with the ‘first prize’ results mentioned…Mr. Laessle is a painter who likes to do his work on the spot, to apply the hot off the griddle technique to his landscapes. He paints still lifes in his studio at 6142 S.W. 42nd St., yes and an occasional portrait is undertaken there. But when you paint scenes flooded with Florida sunshine, you need to be out in the sunlight to get the proper affect, this traveling artist believes…So far, the principal painting areas have been the Keys and the region about Marco Island, ‘though up Palm Beach way’ has also provided some subject material.”

Nellie Bower, art critic for the Miami Daily News (June 15, 1952) describes Laessle, “His work in portraiture, highly finished with close attention to fine paint technique, differs entirely from his loosely expressed watercolors which in color, are brilliant and sunny, whereas his oils, portraits and still-life, reach a high mark in quality, are subdued in tone and low in key…at the Terry Art Institute, students find him a patient, understanding and through instructor.”

Laessle continued at the Terry Art Institute through 1956. He is listed as a Miami artist in the 1963 edition of Who’s Who in the South and Southwest. There is no evidence he continued to paint or exhibit after 1963. Laessle left Miami for Lutz, a small town just north of Tampa, where he died in 1988. 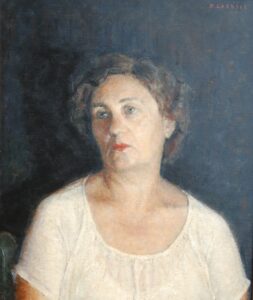