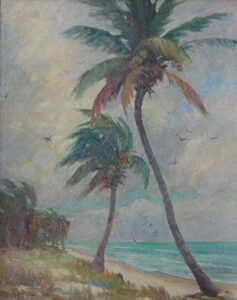 Rachel Stearns loved Florida. As a girl growing up in Madison, Wisconsin, her father, returning from a business trip to Florida, gave her a small box of sand. He joked, “here, Rachel, put this sand in your shoes and you’ll always want to live in Florida.”

Following her graduation from the University of Wisconsin, Stearns taught in the university’s art department. She later moved to Chicago for study at the Art Institute and while there helped found the Illinois Society of Fine Arts. In 1950 she moved to Gainesville and later to Miami.

In Gainesville she was an active member of the Gainesville Association of Fine Arts and a friend of artist Emmaline Buchholz, the first president of the Florida Federation of Art. Stearns taught art classes in both Gainesville and Miami.

Stearns began painting animal portraiture when a friend, whose pet dog had died, asked her to try to paint a likeness of the animal, which the artist had seen only once, from pictures. While she was engaged in this painting a friend of the friend saw the work and commissioned Stearns to do his pet. One of his friends saw this painting in progress and commissioned a portrait of his pet. Life Magazine commissioned her for a dog portrait. Stearns painted dogs and cats for the next 20 years but was also skilled at landscapes and still life.

In 1956 she was the director of Miami’s All America’s Gallery. The May 20,1956 issues of the Ocala Star Banner and the Palm Beach Post carried a feature story about Stearns, including a photograph of her at easel, her paintings, Rainbow Falls and Cross Creek, and headlined, “With a palette on her knee…. Stearns finds beauty in moss hung pines, billowy clouds and Florida skies.”

Here is a letter Rachael Stearns sent to Emmaline Buchholtz, unfortunately not dated, that gives a small idea of life as a professional artist. *

Dear Emmaline, Hope that you and your husband are both well and will have a good Christmas and Happy New Year. How many times I have thought how I would have enjoyed being at Key West with you last summer. Of course, I could be idle, and losing both boys, and leaving Gainesville, all at the same time was awful! You would laugh at the jobs I have had…of course it was all painting some watercolors…same old…some advertising etc. Finally, a friend telephoned me to take over some work she could not handle, and I have certainly enjoyed it and made a lot of money!! I ditched all the other work. I thought I would be having a vacation now, but when I delivered some canvases today, he gave me a big order which will keep me busy into Feb. I have been surprised at the amount of modern art shown here, but unless galleries show conservative they cannot survive. The Chicago Galleries are stronger than ever, and they show only conservative. The Field galleries probably do the largest business and only a small part is modern…enough to give variety. Landscapes outsell flowers at the moment.

Hope to eventually get down to see everyone.

A realistic artist, Stearns said, “She paints to please herself and, as a consequence, pleases the majority of those who view her work, why paint only design…when nature is so beautiful.”