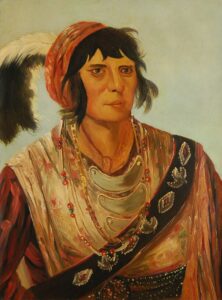 OSCEOLA, SEMINOLE CHIEF, A QUESTION: could this portrait of Osceola, sold as “attributed to George Catlin,” be from his “Cartoon Collection” and actually painted by the master himself? Read on.

George Catlin famous for his portraits of North American Indians, arrived in Pensacola in February 1838. He had been on the trail, painting and documenting the life of American Indians, since 1832. Catlin had just come from Fort Moultrie, South Carolina, where he met and painted portraits of the Seminole Indian leaders Osceola, Micanopy, Yehowlogee and Neamathla. He completed the painting shortly before the famous chief died, of a throat infection and, in Catlin’s opinion, “a broken spirit.” In his book Letters and Notes of the Manners, Customs, and Condition of the North American Indians, Catlin describes Pensacola and the Seminole Indians he found there.

“In my headlong transit through the Southern tribes of Indians, I have “popped out” of the woods upon this glowing land. . .. The sudden transition from the ice-bound regions of the North to this mild climate, in the midst of winter, is one of peculiar pleasure. . .. One’s cloak is thrown aside . . . and arrived on the ever-verdant borders of Florida the bosom is opened and bared to the soft breeze from the ocean’s wave. . .. On the beach a family of Seminole Indians are encamped, catching and drying Redfish. . .. The direful “Trump of war” is blowing in East Florida, where I was steering my course, I shall turn my steps in a different direction.”

The following is from Wikipedia on George Catlin.

When Catlin returned east in 1838, he assembled the paintings and numerous artifacts into his Indian Gallery and began delivering public lectures that drew on his personal recollections of life among the American Indians. Catlin traveled with his Indian Gallery to major cities, Pittsburg, Philadelphia and New York. He hung his paintings “salon style”—side by side and one above another. The touring Indian Gallery did not attract the paying public Catlin needed to stay financially sound, and the United States Congress rejected his petition to purchase the works.

Catlin took his collection across the Atlantic to London, his first exhibit opening in 1840.  He published, Manners, Customs, and Condition of the North American Indians, in two volumes, with approximately 300 engravings. Catlin remained in London for four years, leaving for a tour of European capitals in 1844. As a showman and entrepreneur, he attracted crowds touring his Indian Gallery in Brussels and Paris.

Catlin wanted to sell his Indian Gallery to the U.S. government to have his life’s work preserved intact. His continued attempts to persuade various officials in Washington, D.C. to buy the collection failed. In 1852 he was forced to sell the original Indian Gallery, now 607 paintings, due to personal debts. The industrialist Joseph Harrison acquired the paintings and artifacts, which he stored in a factory in Philadelphia, as security. Harrison later donated the collection to the Smithsonian Institute.

Catlin spent the last 20 years of his life, most of it in Europe, recreating his collection of more than 400 paintings. This second collection of paintings is known as the “Cartoon Collection”, since the works are based on the outlines, he drew of the works from the 1830s.

I purchased this portrait of Osceola in May 2021 from RB Fine Arts in Tavares, Florida. Sold as “In the manner of George Catlin”, the painting had been consigned to RB Fine Arts by someone who purchased it online at a March 2021 auction from Wooton Auction Rooms located at Wotton-under-Edge, Gloucestershire, some 2 ½ hours west of London.

The catalog at the Wooton auction reads as follows, “Lot 377, the next six lots from a private collection recently rediscovered. Attributed to George Catlin 1796-1872-Portrait of Osceola- also known as Black Drink and commonly called Powell the son of a white man (Powell) and a Creek woman from the Peninsula of Florida Seminole Indians, oil on canvas 40cm by 30 cm. This verson probably from the late 1860s, cartoon collection when Catlin was based in Europe (Brussels) the canvas bears a Dutch suppliers stamp, Voortman Oraniestr Amsterdam. He returned to America in 1870, two years before his death.

The question again: given its age, location in England, and accompanied by other artifacts of early native American Indians, could this portrait of Osceola be from the “Cartoon Collection” and painted by Catlin himself?