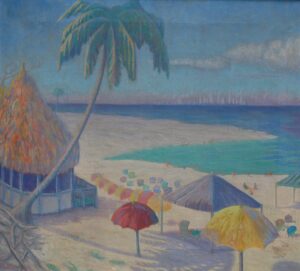 Frederick Washburn was a nationally known professor of entomology at the University of Minnesota. From 1895 to his retirement in 1926 his study of insects and their effect on crops helped farmers around the country. Washburn’s education as an entomologist required skill as an artist, a skill he needed in 1923 and again in 1925, when he spent months recording the insect life of the South Sea Island of Tahiti.

In 1923 George Merrick founded the Coral Gables Corporation, the beginning of his dream of, “The City Beautiful” the first planned community in the United States. Merrick began construction of the Biltmore Hotel, made plans for the founding of the University of Miami, and in December of 1925, blazed a trail linking Coral Gables to Biscayne Bay, filling in the waterfront to form what he called Tahiti Beach, transplanting “the colorful effects of a South Sea Pacific Isle with thatched bathing huts” to Miami.

Frederick Washburn had family in Miami. His daughter Alice married Phillip Byfield of Newton, Massachusetts in 1915. Learning of Merrick’s plans, the Byfield’s moved to Coral Gables where Phillip operated an insurance company, was a charter member and officer of the Kiwanis Club, and a member of the Coral Gables Chamber of Commerce. He, along with Richard Merrick and J. A. Wardlaw, was a principal in the Miami Mortgage and Guaranty Company.

Given Washburn’s experience in Tahiti and his son-in-law’s connections to George Merrick, it’s possible that his experiences there, and conversations with Merrick led to the renaming of the Cocoplum area of Coconut Grove to Tahiti Beach. His painting, Tahiti Beach, Coral Gables, defining what could be. The beach was officially opened on February 4, 1926.