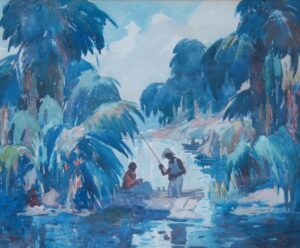 Ennis wintered in Florida. When the Florida Federation of Art held its first annual convention in Gainesville in March 1928, George Ennis was on the jury of selection. His friend Emmaline Buchholtz was president of the Federation.

On April 27, 1929, Ennis penned the following letter on American Watercolor Society stationary, New York City: “Dear Mrs. Buchholtz, In this letter I will try and tell you how well your work looks and how great a promise it gives. Painting is largely a thing of the mind and thought, imagination is vitally important, what we see outwardly with the eyes must be considered, selected, the dross thrown out and with a large quantity of excitement recast on paper or canvas. Your woodland pictures gave me a feeling of mystery and a sense of romance, which means that you have a solid front to work from….” Ennis then goes on to discuss his work on the Encyclopedia and the opening of his exhibit in Syracuse. He then continues, “I’ll write again soon. Sincerely yours, Geo. Ennis. Regards to Fritz and the children.” *

Ennis’ friendship with Buchholtz led to a series of exhibits of his watercolors from the Florida State College for Women in Tallahassee in February 1929 to the Tampa Art Institute in March, the Orlando Art Association at the Orlando Chamber of Commerce in April and to the Art Club of St. Petersburg for Christmas.

Eve Alsman Fuller, art critic for the St. Petersburg Times, three times president of the Florida Federation of Art and director of the WPA Florida Art Project, commented on Ennis’ exhibit at the Art Club of St. Petersburg, “There is a fresh, clean-cut vigor and youth about every painting that I have ever seen by George Pearse Ennis, whether oil or watercolor. Here is a man who seems to come to his easel with the thought of placing there on a pleasant, simple impression of what he feels and sees. He employs no artifice, and the results are always remarkably delightful and whole some. A scene painted on the Gulf Coast, near Cedar Key…caught some of the sunlight and color which Ennis believes will eventually draw many artists to the state.” (St. Petersburg Times, December 15, 1929) 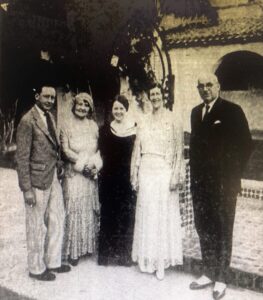 In October of 1931 he became the head of the art faculty at the Ringling School of Art and that year, along with Theodore Coe of Tampa and Leno Lazzari of Rome, Italy, served on the jury of selection for the Florida Federation of Art annual traveling exhibition.  Ennis spoke to the Art Club of St. Petersburg in January of 1932, “There is an intense and interesting form of life and color in Florida. In many ways, it is similar to the extreme north where everything seems so alive and so tremendous. The luxuriant foliage of this state, especially, offers much for the artist. Take Florida palms, the palmetto, the sea grape, all these offer a wide variety of design and ideas. There is abundant material in Florida which has never been put on canvas or paper. There is a great deal that artists have never dreamed of.”

Florida Governor Carlton asked Ennis to serve in an advisory capacity to the committee choosing art for the Florida exhibit at the Century of Progress in Chicago. Ennis proposed to depict Florida history from statehood to present day.

The New York Times commented on Ennis’ work at the Babcock Galleries, “One of the most striking features of Ennis’ tropical studies is his intelligent use of white; the glistening trunks of certain species of the palm, the white expanse of water under strong sun, the burnished white of the sun itself, these are elements seldom grasped by the color enamored artist.”

On his way to the Adirondacks for vacation, Ennis died in a car accident near Utica, New York, August 28, 1936. A memorial exhibit was held in New York City at the Grand Central Art Galleries on Fifth Avenue. The exhibition included many Florida landscapes. Ennis was also known for his stained-glass windows. His three Memorial Victory Windows at the United States Military Academy, West Point, are a fitting remembrance.