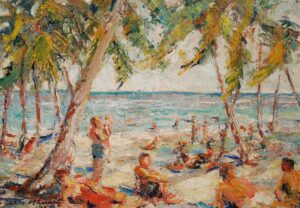 Jesse Whitsit had a remarkable career as an educator and artist, a career that moved from Illinois, to New York City, to Vermont, with extended trips to London and Paris to study art, and finally in 1938, to Miami. Whitsit grew up in Decatur, Illinois and after graduating from Decatur High School, moved to New York City to study at the Art Students’ League. He was part of a summer sketch class at the League that spent the month of July 1901 in Arlington, Vermont. Whitsit loved the area and years later would make it his summer home. (As did Norman Rockwell.) After graduating from the League, he studied at the Art Institute of Chicago. His art work appeared in the Chicago Tribune (Chicago Woman whom Three Artists are Portraying, May 4, 1902, regarding Mrs. D. Hamilton Redmond). The Tribune noted, “Jesse Whitsit, a young Chicago artist, who has not yet completed his course of training at the Art Institute, but of whom great things are predicted, is at work upon a nearly completed oil portrait of Mrs. Redmon.” By 1909 Whitsit was back in New York exhibiting at the National Academy of Design with Ernest Lawson and William Glackens. He and Lawson were friends and painting companions. Needing to earn a living, Whitsit began teaching chemistry at New York’s DeWitt Clinton High School. In 1915, he was co-author, with teachers from New York’s Stuyvesant High and Erasmus High, of First Principles of Chemistry. The book went into multiple printings and can still be found for sale on eBay. The New York Tribune (January 8, 1918) in reviewing paintings at the MacDowell Club, noted: “The most striking canvases are the group of three pictures by Jesse Whitsit. They are joyous in color; blue sea, white boats and gayly colored figures, all scintillating sunshine and warmth, give one veritable nostalgia for summer.” In 1920 Whitsit purchased a summer home on the side of Red Mountain in Arlington, Vermont. The Bennington Evening Banner commented, “It is his intention to occupy it during the coming summer, and eventually to become a permanent resident of our village. We are pleased.” In 1925 he took a leave of absence from DeWitt Clinton, for 6 months study of art in Europe.

Whitsit first came to Miami in 1932, but it wasn’t until 1938 that he purchased property in the Coco Plum Terrace subdivision of Miami, and immersed himself in the Miami art community. He was elected to Miami’s Blue Dome Fellowship, the oldest professional art organization in Florida. At the Miami Woman’s Club annual art exhibit in February 1939 his canvas New River received a gold medal. When his friend Ernest Lawson, N.A. died in 1939, the Fellowship’s opening reception in January 1940 was dedicated to Lawson and Jonas Lie, N.A., a close friend of Martha Dewing Woodward, who started the Blue Dome Fellowship, first in Woodstock, New York, in 1915, and in 1920, Miami. The Miami Daily News (January 21, 1940) noted, “Jesse Whitsit, newcomer, is entering four landscapes of local subject matter in this memorial exhibition.”

The Miami Herald, April 13, 1941, “Mr. Whitsit is showing his typical small Florida pieces, in which the uniform colors are put on with a rough, splashy technique, but with good effect. The greens and blues are the same in all the examples shown, and the treatment of palms and waves and boats is uniform. Most appealing in this reviewer was ‘Florida Dunes’ and a sail-boat piece, ‘On Biscayne Bay.’ His Florida skies in all the pictures are lovely and well considered.”

The Miami Herald, February 8, 1942, “Whitsit, who paints in Arlington, Vt. in the summer and endeavors to catch the eccentricities of tropical light here in winter, has some lovely beach landscapes on view, and a particularly nice oil of the Everglades. He is a retired chemistry professor, for many years head of the chemistry department of a large New York high school, and his textbooks on that subject are widely used.” Whitsit was guest speaker at the 1942 Miami Woman’s Club Annual Artists and Writers Breakfast. In June 1943. The Bennington Evening Banner announced Whitsit, of Miami, Florida, has arrived to spend the summer at his home here. At the Florida Federation of Art’s 19th  annual exhibit in Miami in December of 1945 Whitsit and Ralph McKelvey both spoke on the presumption that art exhibits should be free. “Art museums and galleries are too generous. They have taught the public to expect everything for nothing, causing works of art to be underestimated in the public eye…” Whitsit was elected president of the Blue Dome Fellowship for 1946-1947.

Whitsit continued to spend winters in Miami and summers in Arlington, Vermont until his death in Miami in March of 1957. The Miami Daily News: “Jessie E. Whitsit died here yesterday. He came here in 1932 from New York City. He was a retired chemistry teacher and authored a handbook for chemistry instructor…. Friends are asked to donate to Variety Children’s Hospital in lieu of flowers.” Someday, when the Florida art community finds more of his work, I expect him to be recognized, along with Lillian Wells and Catherine Stockwell, as one of out great Florida impressionists.