If there were two people, a married couple, in the history of Florida art that epitomized a life of romance and dedication to the highest principles of creative art, it was George Snow Hill and his wife Polly Knipp Hill. The couple, in my mind, represent the very essence of what living a life in art means. George was likely Florida’s finest muralist, Polly its most prolific and sensitive etcher of Florida and the American scene. Their work can easily be found on the internet. Polly had a definitive exhibit at the University of Georgia in 2012, twenty-three years after her death. Too much of George’s large mural work has been lost and what remains of his WPA murals are scattered in rural Florida post offices. His Coast Guard murals in St. Petersburg are not generally open to the public. His Clearwater murals, five of them depicting life in the Florida sun, were lost, and his painting of Black Troubadours, Musicians performing on Pass A Grill Beach, one of two done for St. Petersburg City Hall, was torn off the wall and destroyed. His work for the Florida Pavilion at the Chicago Century of Progress, 1933-34, was lost. Thankfully, one of his greatest works, the thirty-two foot mural of Tony Janus and the first commercial air flight from St. Petersburg to Tampa, long neglected, was restored at a cost of almost $400,000 and now hangs, with five of his other paintings depicting the history of flight, in the Delta Airlines terminal at Tampa International Airport. The Hills’ lives in art were touched by creative fire but both had their share of tragedy, George more so than Polly, considering the loss of his work. Let me tell you a bit about them.

Polly Knipp was born in 1900 at Cornell University in Ithaca, New York where her father was working on his PhD in physics. She grew up in the academic world of the University of Indiana and the University of Illinois, where Dr. Charles Knipp was professor of physics. Polly’s mother was one of the first graduates of Arcadia High School in Arcadia, Indiana, and her fondest childhood memories were of her mothers home and the surrounding rural countryside.

George Snow Hill was born in Munising, Michigan in 1898, the grandson of a Civil War colonel from Maine. His father George R. Hill, rebelling against a West Point education, became wealthy running a tanning company in Athens, Pennsylvania and helping to organize the Farmers National Bank of Athens. His parents divorced when George was twelve. George R. Hill kept his 52 foot yacht the Wayfarer in Jacksonville for the summer months and first cruised to St. Petersburg, Florida in the winter of 1917. He continued to dock his yacht in downtown St. Petersburg until 1928 when he bought property in Lakewood Estates, sold his yacht, and stayed.

The couple met as undergraduates in the College of Fine Arts at Syracuse University where he was, as Polly describes it, her “boyfriend.” She fell in love with him because “he was the most talented student and I was second most talented.” Here is a portrait by George Snow Hill, of Polly Knipp as a student. 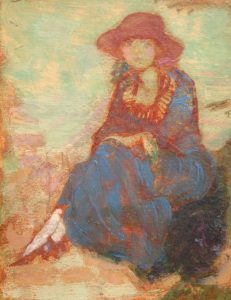 George Snow Hill. Polly Knipp as a student at Syracuse University, oil on board, 6 ¾ by 9 inches. Signed on back, “By GSH, given to PK in college.”

At graduation in 1922, George won the Augusta Hazzard Fellowship for the best painting in the graduating class and with the prize of $1,000 and likely a little help from his father, left for the Paris of Picasso, Hemmingway, the Fitzgeralds and Gertrude Stein.

Polly made her way to New York City and walked the streets with her portfolio under arm. She said of the time, “who is going to buy paintings by a student right out of art school? Especially if they weren’t very good.” Six months later she got a job designing children’s advertisements for Sak’s Fifth Avenue. She relegated her freelancing to after hours for painting, and lunch time for selling. “Often I’d paint till four or five am. I was saving money to go abroad.”

George began his studies at the famed Academie Colarossi and the Academie de La Grande Chaumiere. By 1925 his work was being exhibited regularly at the Salon des Artestes Francais. In June of 1925 an article with a Paris byline appeared in many American newspapers. “George Snow Hill, alias Whiskers, has long been famous in the Latin Quarter because of the thick black growth which hangs below his chin. But the chances are that he will be much more so now because of Le Balcon. The Balcony is a little gem in the style of the French eighteenth century and is attracting many a visitor for its spiritual vision and range of the artist’s palette. Certainly one of the most agreeable compositions to be seen at the annual Salon des Artistes Francasis now at the Tulleries Gardens.” Hill’s exhibit at the Simonson Galleries in Paris was sponsored by the American Ambassador to France and the French Minister of Fine Arts, and Le Balcon was invited for exhibit at the Royal Academy, London, England.

Three years after graduation Polly landed at Le Harve. Standing on the dock waiting for her was George Hill. They were married in Paris in November 1925. Polly began studies at the Academie Colarossi and in 1926 exhibited her etchings at the Salon des Artistes Francasis and the Palette Francais. For the next four years they studied and worked together in France, Spain and Brittany, drawing skill and knowledge from famous European artists. It was in this period she, “Truly became devoted to art.”

About that time in Paris, Polly is quoted in the St Petersburg Times, “I don’t think he would have married me if he thought I was going to be a commercial artist. He was only interested in the highest art forms. He told me I had a talent for black and white line drawings and suggestged that I specialize in etching. I probably wouldn’t have amounted to much as an artist if he hadn’t been such a taskmaster. He never permitted me to dilly-dally.”

Here is a small etching by Polly of George as a Parisian flaneur. 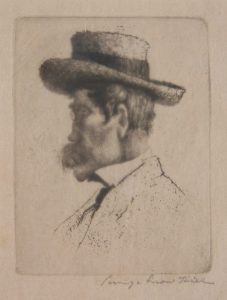 The couple came home briefly in 1927 for a joint exhibit of paintings and etchings at the Ferargil Gallery on East 57th Street in New York City. The Feragil, established in 1915, exhibiting primarily contemporary American artists, closed in 1955. In 1928 while still living in Europe, the couple again returned home for joint exhibits of their Parisian work at the J. B. Speed Art Museum in Louisville, Kentucky and at the Brooks Memorial Art Gallery in Memphis, Tennessee.

The onset of the Great Depression forced the couple to come home in 1930. George had been away almost six years. It was not the best of times for young artists to begin a career. In January Polly entered her Paris work at the Brooklyn Society of Etchers and her Croquis Class at the Academie Colarossi won first prize, from a pool of 2,220, for the best print by an exhibitor not a member of the society. (A croquis is a quick, sketchy drawing of a live model.) In February the Ferargil Galleries in New York City opened a joint exhibit of their work in Belgium and Brittany. 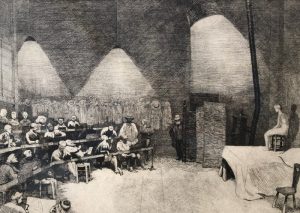 The couple first came to St. Petersburg in 1932 to visit George’s father. They loved the area, bought a home in Lakewood Estates and stayed. Considering the times, they met with success almost immediately. The Art Club of St. Petersburg, then located on the site of the present St. Petersburg Museum of Fine Arts, celebrated their arrival with a February 1933 two man exhibit of their work. Fifty-one etchings by Polly and twenty-eight oils, many of Florida scenes, by George. Included were sketches of his Reconstruction, awarded a commission by the State of Florida for one of six historical murals to decorate the Florida Pavilion at the Chicago Century of Progress. Here are two of his preliminary paintings for the Chicago exhibition. 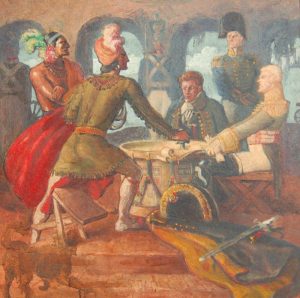 George Snow Hill, The Treaty at Moultre Creek. Oil on board, 30 by 30 inches, study, for Chicago Century of Progress, 1932. 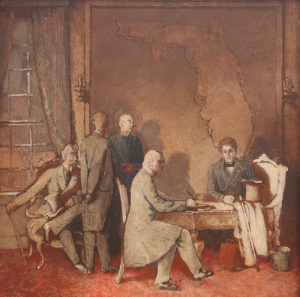 George Snow Hill, The Diston Treaty. Oil on board, 30 by 30 inches. Study for Chicago Century of Progress, 1932.

In the years that followed Polly became a distinguished American artist, her etchings purchased by the Library of Congress and exhibited annually at the National Academy of Art on 5th Avenue in New York City. Summer Idyll appeared in Fine Prints of the Year, 1930; Thrashing Dinner in Contemporary American Prints, 1931; Country Auction in Fine Prints of the Year, 1932 and To Green Pastures, in 1933. In 1941 she exhibited Picnic at the Beach, purchased by the Library of Congress; Cat Shaking After the Quilting at the Philadelphia Print Club; and later Quilting Party, East Side Street Urchins and Johns Pass. In 1946 Green Benches was exhibited at the National Academy and Seashell in the Parlor won a first in etching. Fourth of July in Arcadia won 1st prize in etching at the 1946 Florida Federation of Art Annual.

Polly said she had four different periods to her work. A European period, a Florida period, an Arcadian or American period, and a mountain period. She chose the name Arcadia, “because every state had an Arcadia” but her work recalled her family’s early life in Arcadia, Indiana.

Here are George’s preliminary sketches for the Buccaneer Room at the Tampa Terrace Hotel.

George Snow Hill, Scotch Settlers in Florida. Oil on board, 15 by 35 ½ inches.

In 1953 the couple built a cottage in the mountains near Highlands, North Carolina and enjoyed quiet summers there for the remainder of their lives. In Highlands Polly was in her “mountain period.” George had a bad heart and died February 3, 1969 from injuries sustained in a car accident. Polly continued working and exhibited at Ruth Eckerd Hall, Eckerd College, the St. Petersburg Main Library and in local art galleries. She died February 22, 1990, survived by her son George Jr.

There was a special sympathy to their lives in that both thought of art as a dedication rather than a profession, both played the piano, both worked from memory, “that way we remember only the important things, the unessential’s are left out,” and both thought of art as “communication;” that if a painting needed explanation it was more “modern art,” and both celebrated the American scene, George in colorful, often satirical murals and Polly in joyful but keenly observed fine point etchings.

Well, that’s George Snow and Polly Knipp Hill. It was an honor for me to tell you about them. Someday when you’re out antiquing perhaps you’ll meet them again.

This article relied upon sources in the St. Petersburg Times, now the Tampa Bay Times, from 1925-2009,