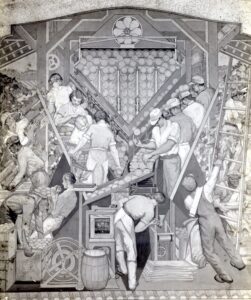 Edith Fairfax Davenport, Orlando, Zellwood. The Orange Industry in Florida, 1936, mural for the Orlando Chamber of Commerce, 10 by 12 feet.

Edith Fairfax Davenport was a prominent figure in art development in central Florida. Not only was she the first American woman admitted to the French Academy, but she was also James McNeil Whistler’s niece. Davenport served for years on the jury of selection at the Florida Federation of Art’s annual exhibits and was elected president of the Federation in 1952.

Davenport grew up in Kansas City, Missouri where her father J. J. Davenport was mayor. Her first training in art came at Kansas City High School. The Kansas City Star (March 12, 1899) noted her work there, “A drawing from an anatomical cast by Miss Edith Fairfax Davenport is a good example of the thoroughness of the school.” She entered the Ecole des Beaux Arts in 1905 as the first American woman to pass the examinations and be admitted officially to the school. After years in France, she opened a studio in Florence, Italy. Davenport received a decoration from King Albert of Belgium for her World War I paintings. Returning to the United States, she had exhibitions in New York City, Kansas City, Missouri and New Orleans.

J.J. Davenport built a home in Zellwood, some thirty miles north of Orlando in 1884. Edith Davenport first visited here for the winter season of 1912 and found friends in the Orlando art community. She was one of twenty-five people who met at the Albertson Library on January 15, 1924, to form the Orlando Art Association. The Orlando Sentinel noting her family ties to Whistler and her work in Paris, commented, “It is with pride and happiness that the new art association looks forward to having a Davenport exhibit here.” A week later, on January 21, the first exhibit held by the Orlando Art Association consisted of more than thirty of her paintings. Davenports association with Lou Halstead Jerome and Ruby Newby in the forming of the art association is noted by the Sentinel, with “the liveliest gratification.”

Davenport is listed as an artist working for the government in the Report of the Assistant Secretary of the Treasury to Federal Emergency Relied Administration, December 8, 1933-June 30, 1934. In 1936-1937 as part of the Florida Art Project, WPA, Davenport painted four large murals, ten by twelve feet, depicting the industries of central Florida, including The Cattle Industry, The Orange Industry, The Turpentine Industry and The Lumber Industry for the assembly hall of the Orlando Chamber of Commerce. 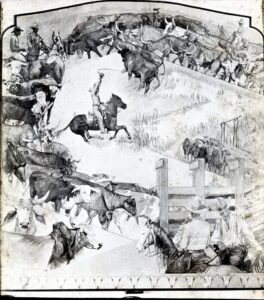 Edith Fairfax Davenport, Orlando, Zellwood. The Cattle Industry in Florida, mural for the Orlando Chamber of Commerce, 1938, 10 by 12 feet.

From November 1937 to April 1938, she gave a series of five lectures on art history to the Gainesville Association of Fine Arts, presenting a comprehensive history of the world’s art, from the ancient art of the Far East, Aegean and Greek art, Roman, Byzantine and Medieval art, to the Renaissance and Modern art. 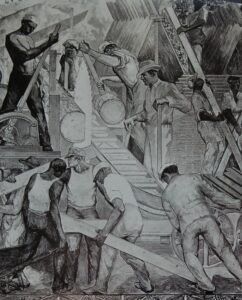 Edith Fairfax Davenport, Orlando, Zellwood. The Lumber Industry in Florida, mural for the Orlando Chamber of Commerce, 1937, 10 by 12 feet.

At the Florida Federation of Art’s annual convention in December 1951 Davenport was elected president.

Davenport was active in the cultural life of Zellwood and Mount Dora. At Christmas time her painted figures for the Nativity scene were lighted on the lawn of Mount Dora City Hall and in the summer months before her death in 1957, Davenport offered free art lessons for school age children at Mount Dora High School. When she died in Winter Park in 1957 the Orlando Sentinel (November 3, 1957) noted her death with a review of her life and commented, “Miss Davenport filled her life with enough accomplishments for two persons…. There were no survivors.”

Davenport was a cousin of James McNeill Whistler and Whistler’s Mother was her aunt. Davenport made a copy of this famous painting, now in the Louvre, by special permission of the curator of the Luxembourg Gallery, where the canvas then hung. Davenport was able to make the copy the exact size of the original, and with an identical frame, this painting now hangs in the Whistler House, Lowell, Massachusetts, birthplace of Mrs. Whistler, on permanent loan to the Lowell Art Association. 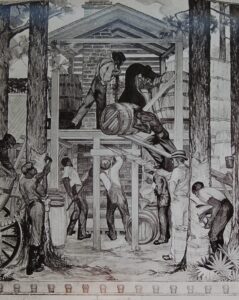 Edith Fairfax Davenport, Orlando, Zellwood. The Turpentine Industry in Florida, mural for the Orlando Chamber of Commerce, 1935, 10 by 12 feet.