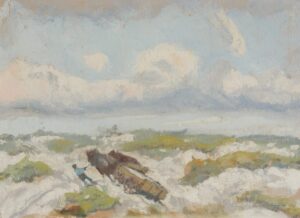 Orlando Schubert was a Cleveland, Ohio artist who wintered in St. Petersburg. Famous for his painting of Perry’s Battle on Lake Erie, Schubert first came to the city for the winter in 1919 and, from his trips to tarpon fishing grounds, did paintings of the “silver king” in action. In 1924 Schubert purchased a lot on St. Petersburg’s Central Avenue and later built a home on Fifty-third Street South. He died there, age 83, in 1927. In 1934 the St. Petersburg Historical Museum held an exhibit of his works and in 1936 Schubert’s landscapes were donated to the newly formed Clearwater Art Museum, as a nucleus of the museum’s collection. The Encyclopedia of Cleveland History notes that Schubert was an early Cleveland artist especially noted for his marine paintings. Born on Erie (E. 9th) St., he was the son of early settlers Mary and Balthasar Schubert), a nephew of German composer Franz Schubert and founder of the Cleveland Grays band. Orlando Schubert acquired a proficiency on many musical instruments before leaving home to work on a Great Lakes boat. By 1873 he had returned with enough knowledge of art to render a well-regarded watercolor of Cleveland’s lakefront. He joined the group of local artists in the old City Hall known as the “Old Bohemians” and was a charter member of the Brush and Palette Club. Schubert then left Cleveland to study and paint in Munich for four years. Upon his return he ran a print shop on Detroit Ave. to support his painting, which he pursued at his lakefront home in Bay Village. In 1913 he painted his magnum opus, The Battle of Lake Erie, on the centenary of that event. Some of his paintings were destroyed two years later by a fire that consumed the next-door home of his brother and threatened his own. The lifelong bachelor died in St. Petersburg, Fla., where he bequeathed many of his paintings to form the nucleus of an art museum. His remains were returned for interment in Lakewood Park Cemetery. The Battle of Lake Erie, which he had once unsuccessfully tried to sell to Cuyahoga County, was presented to the county in 1961 by a former Clevelander living in St. Petersburg. Education: In Munich, Germany. Born: 1844, Cleveland, Ohio. Died: December 11, 1927, St. Petersburg, Florida.  Membership: Art Club of St. Petersburg. Exhibits: Art Club of St. Petersburg, January 1927; Art Club of St. Petersburg, 5th Annual, February 1927, Florida watercolors; St. Petersburg Historical Society, December 1934, one man exhibit; Clearwater Art Museum, January 1936, one man exhibit.