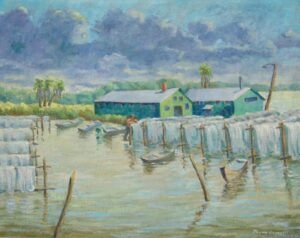 Raised and educated in Oklahoma City, Oklahoma, Mayme Sellers was executive secretary of the Association of Oklahoma Artists from 1935 to 1938. A poet as well as an artist, her poem The Good Earth was adopted by schools in Oklahoma as the state poem.  In 1938, now a student at the Art Students’ League in New York City, Sellers met Charles Leonetti, a director at the League who was teaching there and in New York City schools. They were married in 1939 and moved to Tampa in 1945.

After the war, when the Tampa Little Theater produced the hit comedy Harvey, Mayme Leonetti painted the portrait of Elwood P. Dowd with his companion Harvey for the play’s backdrop. Leonetti was president of the Tampa Art Institute from 1946 to 1948 and a leader of Tampa’s Florida Fine Arts Guild, sponsoring over 140 local art exhibits a year.

With a forty-year career teaching art in Tampa, at her own studio, and for the Tampa Recreation Department, Leonetti is quoted in The Tampa Times (April 6, 1966) “As an artist I feel I’m bottled up with the ability to pass on what I’ve learned…the crowning point of my life. It I never do anything else for the rest of my life, I feel I have accomplished something.”

Her artist husband, Major Charles Leonetti (USAF), a former president of the New York’s Art Students’ League, died in 1994.  Leonetti continued to paint and lecture on art in Tampa until health issues intervened. She died in Tampa in 1996. 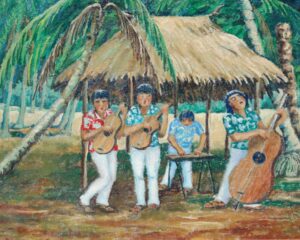