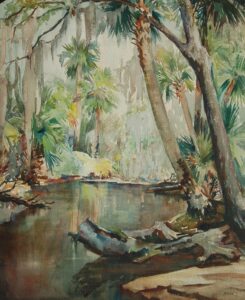 Edith Roddy grew up in Meadville, Pennsylvania at a time when the country was still mourning Abraham Lincoln and honoring the heroes of the American Civil War. Given the opportunities for woman at the time, there was a heroic quality to her life. Always artistic, when the local Academy of Music presented the dramatic cantata Belshazzar, Edith Roddy age 17, sang the role of Myra. She composed the class song for the Meadville High class of 1895.

Roddy attended Allegheny College where, in addition to general studies, she studied commercial illustration. Graduating in 1900, Roddy continued her education at the Boston Museum School of Art. She returned home to Meadville in 1902 as an instructor in art at the Pennsylvania College of Music, teaching drawing and watercolor painting.

In 1907 a wider world was opened to her when Roddy accompanied Professor of Sociology N. P. Gilman and his family on an extended visit to Italy where, in a letter home she, “found the very quaintest kind of a jack-in -the pulpit you could imagine. I wished Mr. A…in the pulpit might have been here to pluck it. So, I gathered it myself, and since I came in, I have made a little sketch of it.” Roddy returned home to continue on the faculty of the College of Music and joined the newly founded Meadville Art Association. Famed American impressionist Martha Walter was a member.

An accomplished public speaker, Roddy began lectures on her trip to Europe and was toastmistress for an alumni banquet of the Allegheny College sororities. She continued her studies in art with Charles Hawthorne, Richard Miller and George Ennis. Ennis was later the first director of the Ringling School of Art. Her illustrations and articles appeared in Literary Digest, Christian Science Monitor, School Arts Magazine, Design Magazine and Keystone View Company. Roddy had one-man shows in New York City at the Vanderbilt Hotel and at Arnold and Constables Avenue of Arts.

Edith Roddy never married. When her sister married the Reverend Dr. John H. Applebee, the minister of the historic May Memorial Unitarian Church of Syracuse, New York, (the Unitarian Society was founded here in 1838), Roddy bought a home there, some 250 miles north and east of Meadville. She would spend the rest of her life here, moving from Syracuse to Florida for the winter seasons.

In December of 1934 Roddy joined the faculty at the Ringling School of Art in Sarasota, teaching classes in landscape, flower painting and still life for the winter season of 1935. She began giving weekly lectures on the history of art and art appreciation that continued through the 1937-1938 season. In her first lecture on “The Different Ways of Finding Enjoyment in Pictures” she said, “Sarasota is exceedingly fortunate in having here to be used freely a collection of European pictures such as may be found only in the galleries of our larger cities. Unless we learn how to interpret this language of art, we may miss the very thing that makes a picture worthwhile.”

Roddy was closely affiliated with the Florida Federation of Art and the Sarasota Art Association. At the Federations 9th annual exhibit, she won a first in watercolor, professional and a first for best Florida subject.

A brief review of her work at the Sarasota Terrace Hotel in the Sarasota Herald, February 25,1938, reads, “‘Breeze’ and her other sea pictures have a fine feeling for the wide expanse of sea and sky, and in ‘The Veterans’ and ‘Cool Green Depth,’ she has the mystery of the jungle and the great mosstic oaks. ‘Monday with the Negro Women,’ and ‘Milk and the Wine Lilies’ with decorative feeling, show the artist’s great ability.”

In February of 1949 the Syracuse Post Standard (February 25, 1949) noted, “Miss Edith J. Roddy, artist of Sarasota, Fla. A former Syracusan is showing a ‘Retrospective Exhibition’ of her paintings in the studios of Ali J. Wilson, 240 McAnsh Square, Sarasota.” The paper continued, “She spent many years traveling abroad, in South America and several seasons in the West Indies.”

In March of 1956 the Sarasota Art Association had a “covered dish supper” for Roddy and she was awarded a plaque for her efforts in promoting American art. Roddy died at her home in Sarasota on July 4, 1957.  The Sarasota Art Association began offering the Edith Roddy Award for the best work by a student under thirty years of age. She left over $50,000 for the addition of a new 10-room building at the Sarasota Welfare Home. Today the Welfare Home, now the Pines of Sarasota, offers a home to over 250 needy Sarasota seniors.