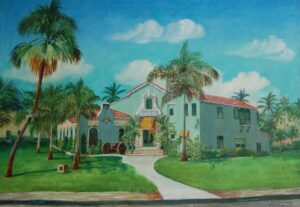 Josephine Lindley is remembered in Palm Beach for her work as an artist, especially for her flower paintings, but a closer look reveals a woman passionate about the city, its appearance, women’s rights, and suffrage. A leader of the Palm Beach Woman’s Educational Association, the Suffrage League of Palm Beach County and the Woman’s Temperance League, she campaigned actively for school improvement, votes for women and against alcohol and smoking for children. A front-page article in the Palm Beach Post (August 14, 1916) describes the efforts of the Educational Association for improvement of the school yard, removing bushels of sand spurs and planting 150 red hibiscus, 1,500 crotons and 75 acalypha wilkesiana. When Palm Beach County denied extension of North Ocean Boulevard from Wells Road to the Palm Beach Country Club, Lindley hired an attorney and was able to save the road. (Palm Beach Post, March 1, 1930). In May 1930 she qualified for a primary election position as county committeeman for her Precinct, marking one of the few times a woman had entered the political field in the county.

Lindley was one of a group of Palm Beach women who, in 1915, started a Ladies Sketch Club as a division of the West Palm Beach Woman’s Club. In 1918 the club’s name was changed to the Palm Beach County Art Club, and finally, to The Palm Beach Art League. Lindley began teaching art about the age of twenty. We don’t know where she got her training but in March of 1932 at the annual exhibit of the Palm Beach Art League, the works by students at Palm Beach High School and the works of pupils of Miss Josephine Lindley were on the walls of the Woman’s Club. During the Depression Lindley worked for the Florida Art Project as part of the Works Progress Administration, WPA. She is listed as an artist working for the government in the Report of the Assistant Secretary of the Treasury to Federal Emergency Relief Administration, December 8, 1933-June 30, 1934.

In December 1935 Lindley under the WPA, Florida Art Project, worked on a group of oil paintings of Seminole Indian life, The Burial Ground, The Dancing Ground, The Thatching of the Hut and Tecumseth Watching the Pot Boil that were presented to Palm Beach High Schools.  The American Legion Home got her painting, Memorial Library Building. Her Howard Park Clubhouse was given to the City of West Palm Beach and Royal Park Bridge was presented to the West Palm Beach Chamber of Commerce.

Lindley continued painting her beloved flowers and remained a thorn in the side of local politicians. As president of the Women’s Progressive Group, she sought and got a mill and one-half added to the school fund, she got up a petition to move the state capital, and in an open letter to Florida Governor Catts about conditions in Palm Beach County Jail, got the Governor to come to Palm Beach and make changes. In 1942, at a meeting of The Women’s Temperance Union, at the First Presbyterian Church in West Palm Beach, Lindley spoke on “Social Hygiene Among Soldiers,” and presented a hand-painted picture of hibiscus to be sold for the benefit of the Union’s work.

On June 24, 1943 Lindley addressed the Progressive Group as their vice-president, and now “one of, the city’s outstanding artists,” on “The Life and Customs of the Seminole Indians.” She illustrated her talk with Seminole paintings she had done over a period of 17 years, showing differences in style of dress of the women. She continued active in the art community in Palm Beach well into the 1950’s. Josephine Lindley died in West Palm Beach on January 17, 1968, age 95. 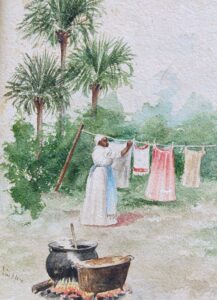