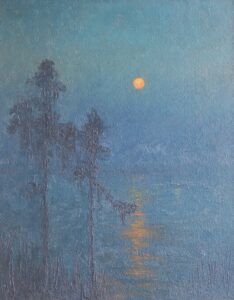 Durett Woodward Stokes was an important figure in the early history of Florida art. Born in Cincinnati in 1881, as a young man he decided on a banking career, worked his way up from messenger to teller in a Cincinnati bank and then quit to become an artist. After training at the Cincinnati Art Academy, Stokes taught art at the Cedarville College (now University) in Ohio. He and a friend rowed down the Ohio River on a sketching trip.

Nearly a year later, in October 1917, Stokes opened the Southwood Galleries in the Baldwin Building on West Bay Street in Jacksonville hoping to establish a permanent art center in the city where paintings could be exhibited. Stokes was founder and director of the second art club in Jacksonville, the Centennial Art Club, that was, as its letter head proclaimed, “an organization for the Promotion of the Fine Arts.”

In a letter to Emmaline Buchholtz, one of the founders of the Florida Federation of Art and its first president, dated September 16, 1918, in regard to the art catalogue for the Florida State Fair, Stokes writes, “We expect, this year… to create a standard for art in the state. The jury system must eventually be recognized everywhere and now is a good time to introduce it here. I have made arrangements for one half the space of the Educational Building for the Fine Arts. This gives us a space eighty feet square…In addition to paintings, sculpture and allied arts which we are soliciting, the field will be extended to the other arts, and I have made arrangements for two concerts, one state and local, a lecture on butterflies, lectures on architecture….” Later that month in a second letter to Mrs. Buchholtz, “We have an election for the permanent officers, for our local club. Miss McQuaid (current president) is leaving for New York so we likely will elect Mrs. Burbridge to succeed and I am searching for an active vice president. Up to the present I have had no help from our officers and none from the members, so I am taking in several new members and will have a general shake-up within the next ten days in order to get more activity.” *

Stokes listed as an artist in the Jacksonville City Directories of 1918 and 1919. In November-December 1919, 84 of Stokes’ paintings of western North Carolina were exhibited in the ballroom of the O. Henry Hotel in Greensboro, North Carolina. The Greensboro Daily News December 5, 1919 commented, “The artist’s mastery of colors in his treatment of mountain scenery has evoked much admiring comment… Mr. Stokes is pre-eminently a landscape painter, and critics maintain that he has never done better work than since he fell a victim to the charm of western North Carolina scenery.” He spent the winter of 1920 in Ocala at Silver Springs and then returned to Jacksonville.

In March 1923 Stokes exhibited at the Students’ Art Club’s all Florida Exhibit in Tampa, where his work was reviewed in the Tampa Tribune, March 16, 1923, “Among the splendid contributors to the Students’ Art Club’s second annual exhibition of Florida art…is Mr. D. W. Stokes of Orange Park, who sent five large canvases. Although receiving requests every day for exhibitions, and now busy getting ready paintings to be sent to New York and Boston, Mr. Stokes gave to the exhibition here a splendid selection for the sake of Florida art. The two largest canvases are, ‘The Heart of the Blue Ridge,’ and ‘The Home of the Mountain King.’ The former portrays the grandeur and majesty of the mountains against a wonderful golden sunset. He has caught the indescribable changing blue haze that shifts from blue to green with a depth of shadows that gives a sense of unseen valleys far beneath. ‘The Home of the Mountain King’ is a masterful painting of a dark wood with the sunlight stealing through just enough to throw into relief a giant forest tree. The painting is full of the mystery connected with a spot where few human beings could penetrate. Many visitors to the exhibit have admired these paintings and expressed a wish to own them.”

Stokes’ paintings were in demand, with northern dealers requesting he send all the Florida landscapes he could paint. Durett said, “I worked feverishly for a while and finally shipped several pictures. Then the Florida land boom collapsed and Florida landscapes have been unpopular ever since.” After more than ten years painting the Florida scene, the collapse of Florida real-estate market and the Great Depression ended Stokes career in Florida.

With no demand for landscape paintings Stokes found himself digging graves just to survive. He later moved to Baltimore where he resumed work as a portrait artist and on an occasional invention that included a large table game of baseball. Stokes’ portraits included two presidents of the University of Maryland. By 1941 he was an established member of the Maryland artists community contributing his work to an Art Exhibition and Sale of Maryland artists for the benefit of the British War Relief Society.

Stokes continued to exhibit in the South, in November 1955, and later in October 1960, advertising in the Florence (South Carolina) Morning News, “Portraits Painted from Life or from Photographs, Sculpture and Painting.” He died in Baltimore on October 30, 1967, age 86, and is buried in Baltimore’s Loudon Park Cemetery.

*These letters published thanks to artist Leonard Weinbaum of Gainesville, who found and preserved an archive of ephemera from the estate of Emmaline Buchholz, now at the Matheson History Museum in Gainesville.