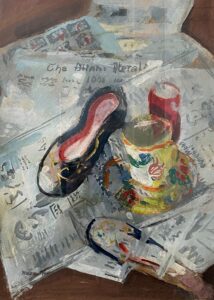 A Hoosier by birth, Marion Terry spent most of her life in Florida, first in Miami and later in St. Petersburg. She lived briefly in Miami in 1939 and then, after a three-year absence, returned in 1942 to open, with her husband E. B. Terry, the Terry School of Fine Art at 2100 West Flagler Street. Terry, wanting to make a contribution to the community, because of a growing list of casualties in the war, dedicated three years to a project of painting portraits of all Dade County men who were killed. The portraits, all 16 by 20 inches, were done from photographs loaned by the families. Nearly 400 portraits were done. Terry commented, “When you saw them all displayed together, it was a wonderful argument against war.”

With the GI Bill and a post-World War II demand for commercial art, the Terry School soon became the largest art school in South Florida, graduating 200 students, many of them veterans, in a two-year course in commercial art. Artists who worked as instructors with Terry in Miami included Arthur Munn, Nancy Russell, Bertha Cowan and Helen Hoodmaker. By 1951 there were 496 students enrolled when the school, now renamed the Terry Art Institute, moved to a larger studio with 24,000 square feet of space at 2323 S.W. 27th Avenue. The Terrys opened a separate Negro Art Institute on N.W. 27th Ave with 143 registered black students.

Terry loved ballet, and when the Ballet Russe de Monte Carlo came to Miami she asked permission to go back stage, sketching during the performances. Her ballet paintings in oil were exhibited at the Norton Gallery and the Society of the Four Arts in Palm Beach, and in Miami, her “All Ballet” exhibit, was a sellout. Later, her passion for ballet continued in paintings of the Bolshoi Ballet, Miami Ballet and the Suncoast Ballet.

The Terry Institute sponsored a Terry National Art Exhibit at Dinner Key Auditorium with a first prize of $5,000. In 1952 the total prize money was $18,000. By 1953 the total enrollment at the Institute was 700 and the faculty now included prominent Miami artists Paul Laessle and Chester Tingler. In the preceding years Terry had painted murals for Florida east coast restaurants, done commercial illustrations for Florida businesses and the Miami Metropolitan Fishing Tournament. Her painting of the Driftwood Inn in St. Petersburg was chosen for publication in the Ford Times article, Favorite Recipes of Famous Taverns and her work was included in the Ford traveling exhibit at the Tampa Art Institute.

Terry had been president of the Terry Art Institute in Miami for eleven fulfilling years when for some reason, perhaps Miami was getting too crowded, at the end of the winter season she moved north to St. Petersburg.

Terry introduced herself to the greater St. Petersburg community with a three day, “Old Fashioned County Fair” at Craft Village on Fourth Street North. The St Petersburg Times had display ads inviting, “Come One! Come All! The occasion of this festivity is the opening of Marion Terry’s Cottage Classes, dozens of artists and craftsmen will be at work.” Events included the raising of the Flag by Mayor Johnson, Craft Village’s Santa Claus, artist demonstrations and a barn yard banquet and folk dancing.

Terry taught art at the Craft Village for the next twenty years. On September 27, 1959 the Sunday edition of the St. Petersburg Times had a special section, Mark 75, in celebration of its 75th year publishing and the growth of the greater Tampa Bay area. Her original painting was on the cover with the caption, “Marion Terry, a noted St. Petersburg artist and teachers’ conception of this issues theme—religion, education, culture and leisure, is a semi-abstractly portrayed in a flow of human activity to a supreme, divine level.” 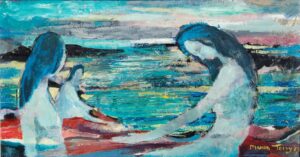 Marion Terry, The Bathers. oil on board, 17 by 32 inches. Exhibited, Florida Federation of Art 35th Annual.