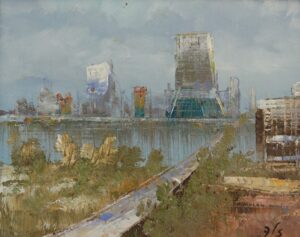 A native of Kansas, Florence Seymour (nee Crawford) first came to Jacksonville in August of 1935, and as a single woman, went to work for the WPA (Works Progress Administration) on West Monroe. There, under the supervision of Don Emery, she helped paint murals of Cinderella, Red Riding Hood, Alice in Wonderland, Little Miss Muffet and the Pied Piper for the Central Grammar School. (Later Corine Scott Elementary School.) Seymour and other artists painted the mural Ribault’s Landing for Norwood Elementary and Ponce de Leon, for West Springfield. The Ribault painting is signed “Angorstain”, a composite of several artists names. She joined the Fine Art Society of Jacksonville in 1936.

Later Seymour worked with Josephine Hill, director of the Jacksonville Federal Galleries for the Federal Art Project, and as an assistant to sculptor Charles Adrian Pillars, becoming a close friend of Pillars and his family. On June 8, 1939, she married architect Russell Seymour. She and her husband were close friends of famed watercolorist, Elliot O’Hara.

Seymour had some influence in bringing formal art instruction to Jacksonville University. In May of 1945 as chairman of the art division of the Women’s Club of Jacksonville, Seymour went to see Dr. Garth Akridge at Jacksonville Junior University about the possibility of the school opening a fine arts department. Nicholas Volpe’s name was mentioned, and he became the University’s first art instructor. Volpe later left Jacksonville for Los Angeles where for years he painted the portraits of actors winning the Motion Picture Academy Awards. 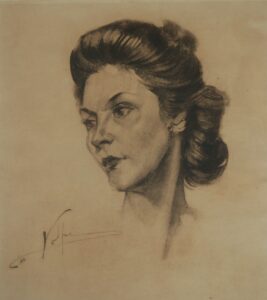 When the Art Division of the Women’s Club changed its name to the Art Exhibition Club and in 1947 to the Jacksonville Art Club, Seymour was president. In 1956 she worked with a sister club, the Jacksonville Beaches Fine Arts Guild to promote National Art Week and raise funds in support of the arts in Jacksonville.

In 1958 Florence Seymour was named one of the Royal Poinciana Queens, at the annual celebration and banquet of the Miami Art League. She painted a large mural for the enlisted men’s lounge on the U.S.S Antietam. For the presentation of the painting, she was invited to the ship and was piped aboard as the painting was brought through a bomb hatch. The mural is reportedly now in the Philadelphia Naval Museum.

Seymour was elected president of the Florida Federation of Art (FFA) in 1959. She was instrumental in the Federation acquiring the DeBary Mansion in Deland as headquarters. Seymour lived at the Mansion for six months getting the over 3,000 signatures needed to permit the transfer of title to the Federation. While president of the Federation, she helped organize the Sanford Art Association, gave art demonstrations all over the state, spoke at schools and on radio about the FFA, visited every club in the state, originated the Governor’s Award for Best Florida Landscape in the annual exhibit, and brought the total membership of the Federation to 5,000.

In the 1960’s Seymour taught art at the Jacksonville YWCA and the Cedar Hills Recreation Center. She helped organized the Art League of Jacksonville and the Charles Adrian Pillars Memorial Society that cast a Memorial Statue of Pillars for a Jacksonville Park. Seymour loved painting; if laughter is the best medicine, then art, at least for Florence, was a close second. She lived to be 102. As an artist she claimed to have sold over 3,000 paintings in her lifetime. 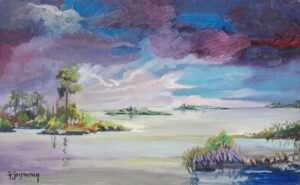