Helen Spach taught art at Miami’s Citrus Grove Junior High for 5 years, Miami Senior High for 24 years and at Miami’s Terry Art Institute. She came to Miami in 1917 from Perry, Oklahoma, where she was born in the Cherokee Strip before Oklahoma became a state. Spach graduated from Miami Senior High in 1921 and the University of Miami in 1944. The Miami Daily News, June 28, 1942 noted her exhibit at the Service Men’s club in Bayfront Park. “This exhibit, all Florida watercolor scenes, and all the work of Helen Spach is attracting much favorable attention by the hundreds of service men who spend their leisure time at the club. Biscayne Bay, Miami Beach’s famed ocean and beach and the Miami river are inspiration for most of the landscapes…Trained entirely in Miami is the boast of this Miami artist, who has lived here 25 years. Two of the artist’s pictures have won the Seymour award given annually as first prize in watercolor at the Miami Art League’s exhibit at Miami Beach Library and Art Center.” 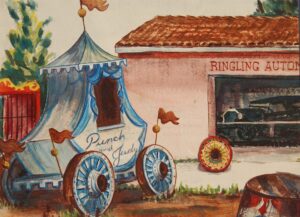